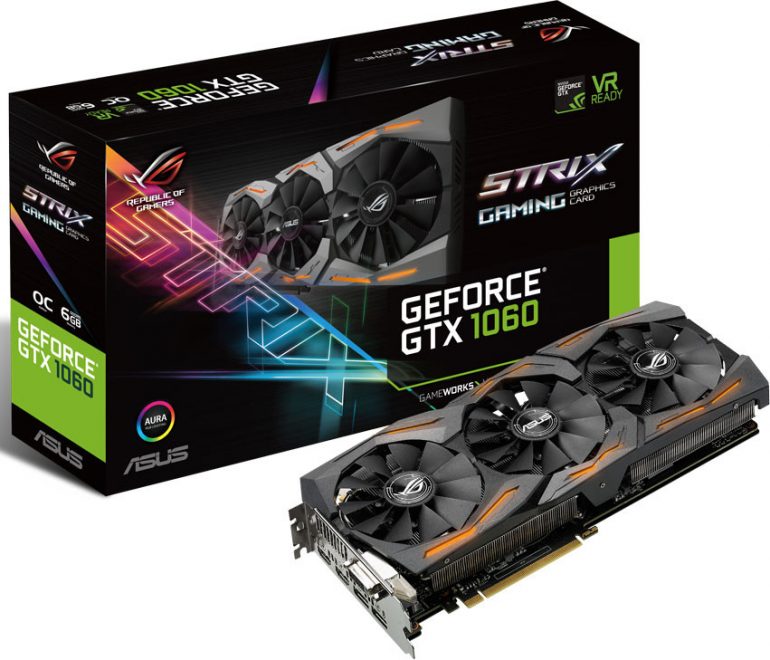 The Singapore launch of the Strix GL702 gaming notebook has been accompanied by another new ASUS product – the Strix GeForce GTX 1060, which we mentioned in the news a few days ago.

The new card belongs to the Republic of Gamers (ROG) company lineup and comes factory-overclocked. Here the GPU runs at 1847 MHz in gaming mode and at 1873 MHz in OC mode. The installed memory remains at 6 GB of GDDR5 and there’s a 192-bit memory bus too – just as expected. There’s no information what speed the memory runs at so we assume it is 8000 MHz. The card also comes equipped with a DirectCU III cooling solution with patented triple wing-blade 0 dB fans, Aura RGB lighting, a VR-friendly design with two HDMI ports, Super Alloy II components, GPU Tweak II technology with XSplit Gamecaster, ASUS FanConnect technology and Auto-Extreme technology. At the back the card features two HDMI 2.0 outputs, two DisplayPort 1.4 connectors and a single DVI-D port.

The price of the new ASUS Strix GeForce GTX 1060 video card is around USD 430.