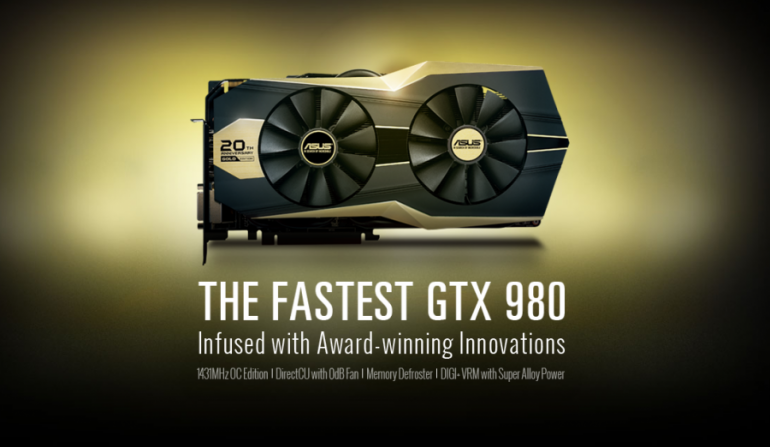 ASUS has launched the just reported GeForce GTX 980 Gold Edition video card at an event, held to celebrate 20 years since the founding of the company. Just like all other GTX 980 cards the Gold Edition comes with the GM204 GPU inside and clock speeds that will surprise gamers.

Before we get to the clock speed we will describe the card a little – the ASUS GeForce GTX 980 Gold Edition includes components of the highest quality and has excellent looks. The card is built on the Matrix Platinum platform and includes a gold-colored PCB and a design that has been specifically created for this card.

The ASUS GeForce GTX 980 Gold Edition is a dual-slot card and includes two cooling fans, a large heat sink and a 14-phase power scheme. In addition the card has been designed to withstand extreme conditions and heavy loading that include very serious overclocking, high voltages and heat. As if this is not enough the ASUS GeForce GTX 980 Gold Edition comes with a special feature called Defroster that protects the installed GDDR5 memory from forming ice when cooled with liquid nitrogen.

Now’s time for the sweetest part – the ASUS GeForce GTX 980 Gold Edition clock speeds. The card’s GPU runs at 1317 MHz and reaches 1431 MHz in Turbo mode. The installed 4 GB of GDDR5 memory has not been touched – it still runs at 7010 MHz.

The price of the new ASUS GTX 980 Gold Edition is unknown but given the tech specs the card will be expensive for sure.