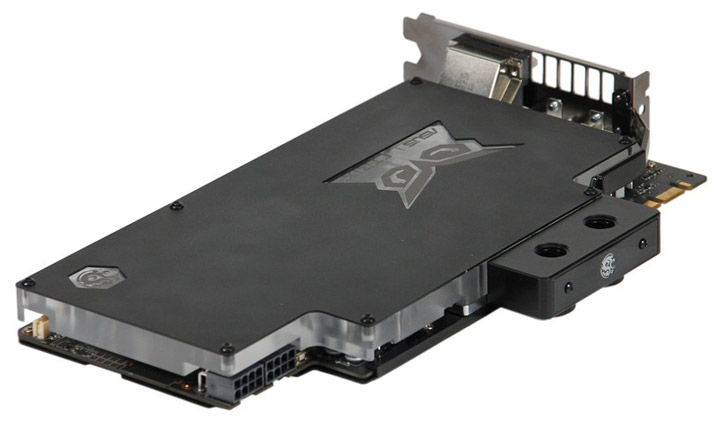 Most video card makers prefer air coolers for their video cards but sometimes they use liquid cooling solutions for better performance and easier overclocking with ASUS being a notable exception – it is next to impossible to find an ASUS video card with a liquid cooler.

Well, this task has become somewhat easier now – the Taiwanese company works on a new GeForce GTX 980 Ti video card that will come with a liquid cooler right out of the box. The graphics card is called STRIX-980TI-P-GAMING-ICE and the liquid cooler, which covers the entire video card, is its main feature. Unfortunately the card comes with an unusual PCB with a 14-phase VRM power system, which means it is not for ordinary users. The card has two operational modes – default and software with each one of them offering different clock profiles. In the default mode the STRIX-980TI-P-GAMING-ICE runs its GPU at 1190 MHz (1291 MHz Turbo), while the software mode allows for even higher clock speeds – 1216 MHz (1317 MHz Turbo). The memory, in all cases, runs at 7200 MHz. This makes the STRIX-980TI-P-GAMING-ICE one of the fastest GTX 980 Ti cards on the market.

ASUS has also thought of the looks of the card – it comes with built-in RGB LEDs and a nice STRIX logo on top of the liquid cooler. In the rear the card has one DVI port, one HDMI port and three DisplayPorts.

ASUS has not announced the STRIX-980TI-P-GAMING-ICE just yet but the card is expected in the next few days. As to pricing it will likely sell for around USD 900 when it arrives.