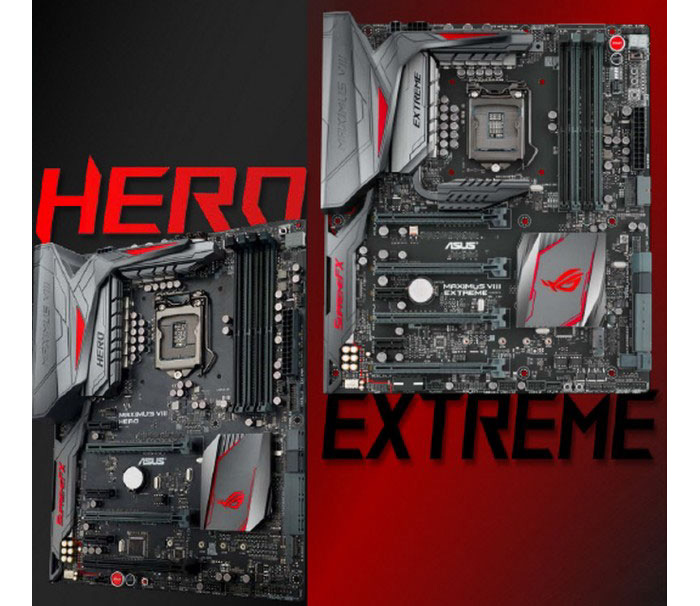 ASUS has presented its first Republic of Gamers (ROG) motherboards, based on the new Intel Z170 Skylake chipset. The new boards will satisfy the needs of hardcore gamers and hardware enthusiasts and there are four of them.

The ROG Maximus VIII Extreme is the top model among the four – it comes with a design that includes a full silver metal and red color scheme that is situated on top of a black PCB. As expected the ROG Maximus VIII Extreme comes with a LGA 1151 socket and support for Intel Skylake processors and gets powered through an 8-pin and 4-pin power configuration. There’s also a 24-pin ATX connector for power as well as a 12-phase DIGI+ VRM that is surrounded by a large heatsink that includes heat pipe cooling for stability. The motherboard has four DDR4 memory slots for up to 64 GB of memory and numerous other options for overclocking and tuning. The board has four PCI-E 3.0 x16 slots, two PCI-E 3.0 x1 slots and one M.2 SSD slot. Eight SATA 3.0 ports, two SATA Express ports and a U.2 SSD port provide storage. There also are two BIOS chips, two USB 2.0 external headers, two USB 3.0 external headers, a SupremeFX audio system, protective armor for the I/O panel and more.

The ROG Maximus VIII Hero is the second board in the line – it is a toned down version of the Maximus VIII Extreme that keeps the same color scheme and the protective armor. The board comes with the same LGA 1151 socket but this time the socket is powered by an 8-pin connector and the CPU socket is surrounded by a 10-phase DIGI+ VRM. The board includes four DDR4 memory slots for up to 64 GB of DDR4 memory, three PCI-E 3.0 x16 slots, three PCI-E 3.0 x1 slots and a single M.2 SSD slot. There also are eight SATA 3.0 ports, two SATA Express ports, two USB 3.0 headers, two USB 2.0 headers, SupremeFX sound, six USB 3.0 ports, two USB 2.0 ports, HDMI 2.0, a LAN port, DisplayPort, USB 3.1 Type-C ports and more. This board is expected to sell for around USD 220-250.

Moving down the ladder we will find the ROG Maximus VIII Gene – this one is a micro-ATX form factor motherboard with an 8-pin power connector and a 10-phase DIGI+ VRM that comes with high-end components. The motherboard also has four DDR4 memory slots for up to 64 GB of memory, two PCI-E 3.0 x16 slots and a PCI-E 3.0 x4 slot. There also are a single M.2 SSD slot, six SATA 3.0 ports, two SATA Express ports, USB 3.0/USB 2.0 internal headers, SupremeFX 7.1-channel audio, HDMI, DVI, an ASUS ROG Connect port, six USB 3.0 ports, one USB 3.1 Type-C port, PS/2 and an Ethernet LAN port. 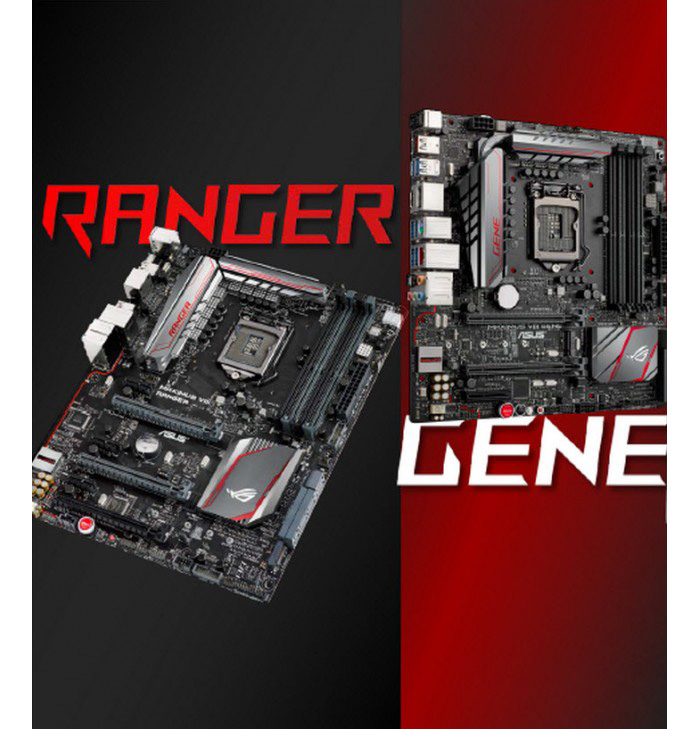 The ASUS ROG Maximus VIII Ranger is the last one of the four and the cheapest. This one is the most basic motherboard in the entire line. The board comes with a single 8-pin power connector, a 10-phase PWM scheme with heatpipe cooling, four DDR4 memory slots, three PCI-E 3.0 x16 slots, two PCI-E 3.0 x1 slots, and a single M.2 SSD slot. Storage includes six SATA 3.0 ports and there are two USB 3.0 headers, one USB 2.0 header, six USB 3.0 connectors, one USB 3.1 Type-C connector, a 7.1-channel audio jack, a LAN port and a few display connectors.

The boards should be on the market any time soon.