The Taiwanese tech giant ASUS has unveiled a large number of LGA1150 motherboards for the upcoming Intel Haswell processors, expected in just a few weeks. The massive announcement includes the high-end Republic of Gamers (ROG) line, motherboards that belong to the ASUS “The Ultimate Force” (TUF) line and classic LGA1150 motherboards. All new ASUS LGA1150 products are based on the Intel Z87 chipset.

The ASUS Maximus VI Extreme is the best ASUS can offer. It includes the same CPU power supply system found in other Maximus VI motherboards, the ability to do 3-way and 4-way multi-GPU setups thanks to the integrated four PCI-E 3.0 x16 slots (x16/x16/NC/NC, x8/x8/x8/x8). The mainboard also has a PCI-E 2.0 x16 slot (electrical x4) and an open-ended PCI-E 2.0 x4 slot. Two Gigabit Ethernet ports, ten SATA 3.0 ports, eight USB 3.0 ports provide connectivity. Strangely enough the Maximus VI Extreme does not come with SupremeFX audio, instead it relies on an integrated Realtek audio. 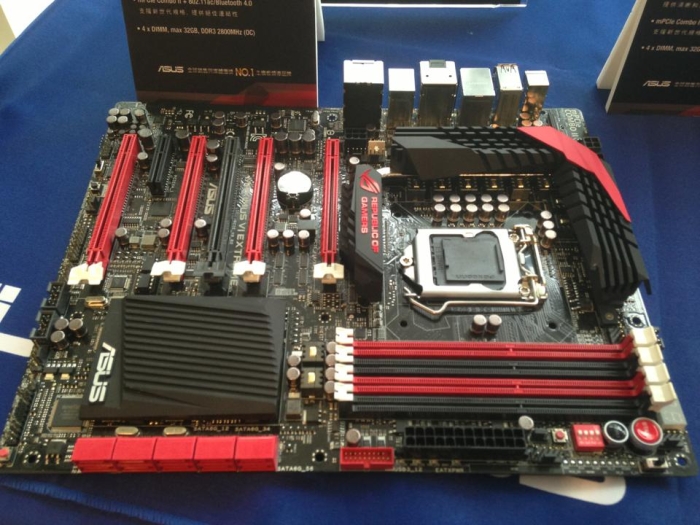 In addition to the ROG line ASUS also unveiled its TUF line, which consists of two models – the Z87-Sabertooth and the Z87-Gryphon. The Sabertooth is a full ATX motherboard with an 8-phase CPU power supply system, eight SATA 3.0 ports, three PCI-E 3.0 x16 slots, 8-channeled HD audio, Gigabit Ethernet, eight USB 3.0 ports, HDMI and DisplayPort and then some USB 2.0 ports.

The classis ASUS LGA1150 line of motherboards consists of five models – the entry level Z87-C and Z87-A, the mid-range Z87-PLUS and Z87-PRO and the high-end Z87-DELUXE. The unusual thing is that all of them now come with black PCBs with golden colored heatsinks instead of the usual black PCBs with blue heatsinks seen until now.

The Z87-PLUS is very similar to the Z87-A except that it offers better overclocking options and a total of twelve SATA ports.

The Z87-DELUXE is the ultimate in the classic line. It comes with 16-phase CPU power supply, the same slots as in the Z87-PRO, ten SATA 3.0 ports, eight USB 3.0 ports, 802.11ac Wi-Fi, dual Gigabit Ethernet, overclocking features and HDMI and DisplayPort outputs.

The pricing on all models is unknown.