Based on Intel’s P55 chipset and purpose-designed for gaming, both motherboards are equipped with a wealth of exclusive gamer-centric features that effect improvements across all facets of the user’s gaming and overclocking experience—from improved in-game response and reduced Internet latency, to convenient hardware-based, real-time tweaking. The ATX Maximus III Formula is targeted at PC enthusiasts, hardcore gamers and early adopters who crave leading-edge specifications, enhanced extensibility, and the cool factor, while the mATX Maximus III GENE is designed for case modders and budget-conscious gamers who prefer smaller—yet still power-packed—machines. 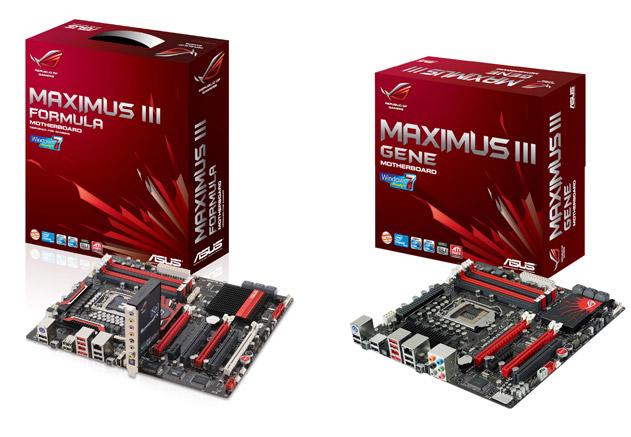 Bearing the Hallmarks of their High-end Heritage

ASUS’ Maximus III Series motherboards are designed to deliver the no-holds-barred gaming performance and gamer-tailored features that have earned ROG its renown amongst gamers. Armed with the best components and top-end technologies, these motherboards ensure users the best possible and most immersive gaming experience on the P55 platform.

Maximus III Series motherboards are packed with advanced gaming features that deliver the best in-game experience, and give users a decisive edge over their opponents.

Maximus III Series motherboards feature a revolutionary overclocking interface dubbed ROG Connect. ROG Connect enables users to link up to the embedded iROG controller via a separate PC—such as a notebook—connected via a USB cable. This allows users to tune the main system at a purely hardware level in real-time, as well as view POST code and hardware status readouts, on a notebook or netbook—just like a race car engineer.

Memory is temperamental, and oftentimes difficult to tune. ROG Maximus III Series motherboards enable users to easily circumvent potential memory compatibility issues with the inclusion of MemPerfect, a tool that automatically tests, fixes, and adjusts memory for the best possible performance. The result is greater system stability, optimized speed, and the ability to resolve issues quickly without having to manually perform lengthy memory tests.

Designed for Users with Differing Needs

Agreement Between Zalman and iZ3D

While both Maximus III Series motherboards feature the same rich complement of features to enhance users’ gaming and computing experience—such as ROG Connect, GameFirst and MemPerfect—they are available in two different form factors to cater to the needs of different users.

The ATX Maximus III Formula is designed for hardcore gamers and performance seekers who demand the very best specifications and superior extensibility. The mATX Maximus III GENE, on the other hand, is designed for case modders and budget-conscious gamers who prefer smaller machines, yet desire the power and features that only ROG can provide.