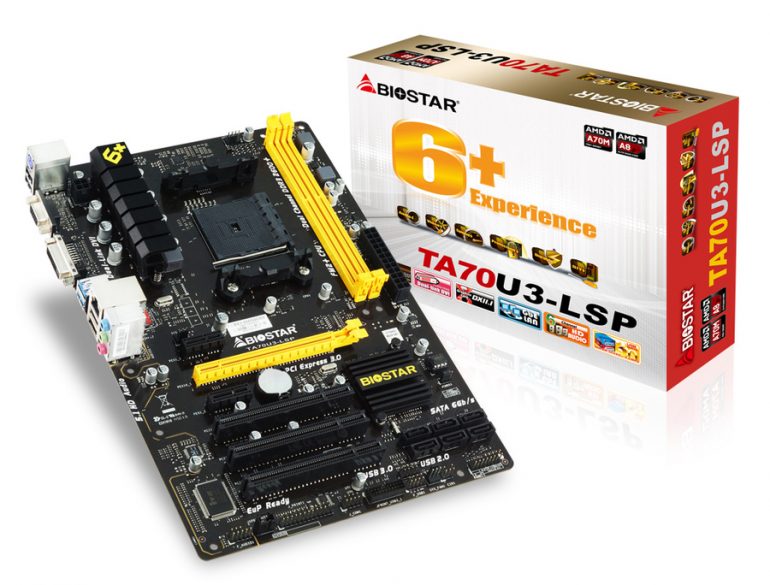 For nearly a decade the CPU maker AMD has been second in performance when compared to Intel and things have not improved, especially in the past few years despite all AMD efforts. In fact the only place where the US company does relatively well is in the GPU department but even there things are not as rosy as they might be. This situation has, however, not stopped Biostar from offering a rather interesting motherboard for AMD chips, called TA70U3-LSP.

The new board is based around the A70M chipset and there’s a unique feature that comes with it – the board can run both AMD A-series and E-series APUs up to quad-core models. Apart from this, though, the TA70U3-LSP does not offer revolutionary features but you get everything you might need thanks to the full ATX form factor – two DDR3 DIMM slots for up to 32 GB of memory, a full-sized single PCI-E slot for videocards, three legacy PCI slots for your favorite PCI-based hardware, six SATA 3.0 ports, USB 3.0 ports, LAN Surge protection, support for AMD’s Dual Graphics technology that uses both the integrated AMD APU graphics core and the GPU in your PCI-E-based video card and more. To finish it up – the board also comes with all I/O ports in the back such as audio jacks, network ports, USB, power ports, etc.

The Biostar TA70U3-LSP will ship soon but the price of the motherboard has not been disclosed as of now. In any case the board is a really interesting solution for AMD fans that want to run almost any AMD APU and then play a game every once in a while. After all flexibility is always a good thing.