Biostar demonstrates LGA 1151 board with DDR3 and DDR4 memory slots 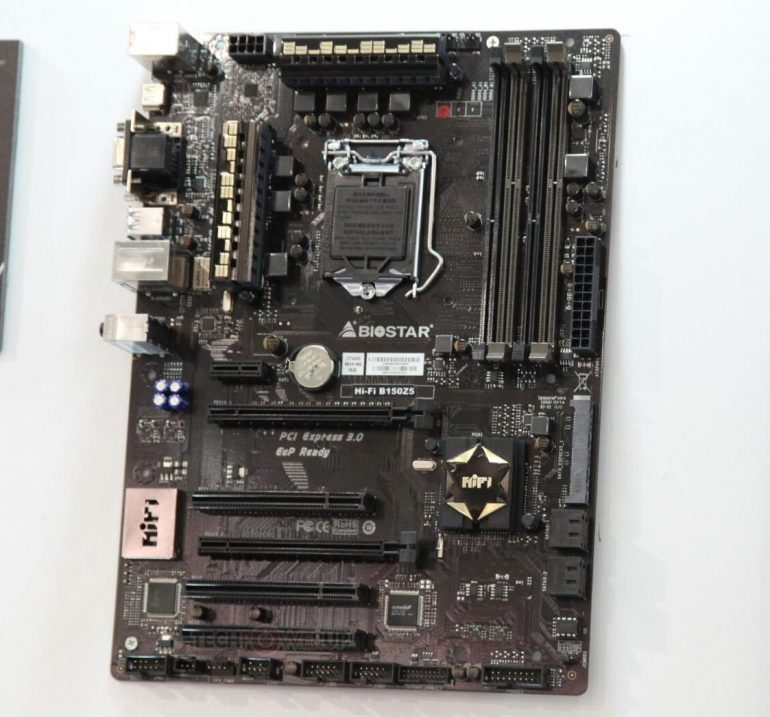 Despite the numerous new announcements, the on-going Computex 2015 in Taipei, Taiwan will likely happen to be the birthplace of the new LGA 1151/Skylake platform. True, we are still missing the actual chips but we have gotten the new Intel 100-series chipsets and more importantly a ton of new LGA 1151 motherboards and this is something that should not be underestimated.

So far Biostar has been stealing the show with a new LGA 1151/Skylake motherboard that features both DDR3 and DDR4 memory slots to ease the migration to the new type of RAM memory. The newcomer is called Hi-Fi B150Z5 and offers Intel’s mid-range B150 chipset plus support for all upcoming Skylake processors. Like we said the main feature of the board is support for two different memory types – the Hi-Fi B150Z5 has two DDR3 memory slots for up to 16 GB of DDR3-1600 system memory and two DDR4 memory slots that allow the installation of up to 32 GB of DDR4-2133 memory. As you probably know the upcoming Skylake generation works with both DDR3 and DDR4 memory and thus the Biostar Hi-Fi B150Z5 motherboard is a great way for users to keep their DDR3 memory while using the latest Skylake chips.

Apart from the memory slots the Biostar Hi-Fi B150Z5 also offers one PCI-E 3.0 x16 expansion slot, one PCI-E 2.0 x16 expansion slot (electrical x4), three legacy PCI slots and one PCI-E 2.0 x1 slot. The storage connectivity on the board is represented by six SATA 3.0 connectors, two of which are wired out as SATA-Express 16 Gbit/s connectors and there are a Hi-Fi 6-channel on-board audio chip, Gigabit Ethernet, six USB 3.0 ports and dual-UEFI BIOS.

There’s no information on how much the Hi-Fi B150Z5 will cost but given its budget-to-midrange features we do not expect it to cost an arm and a leg.