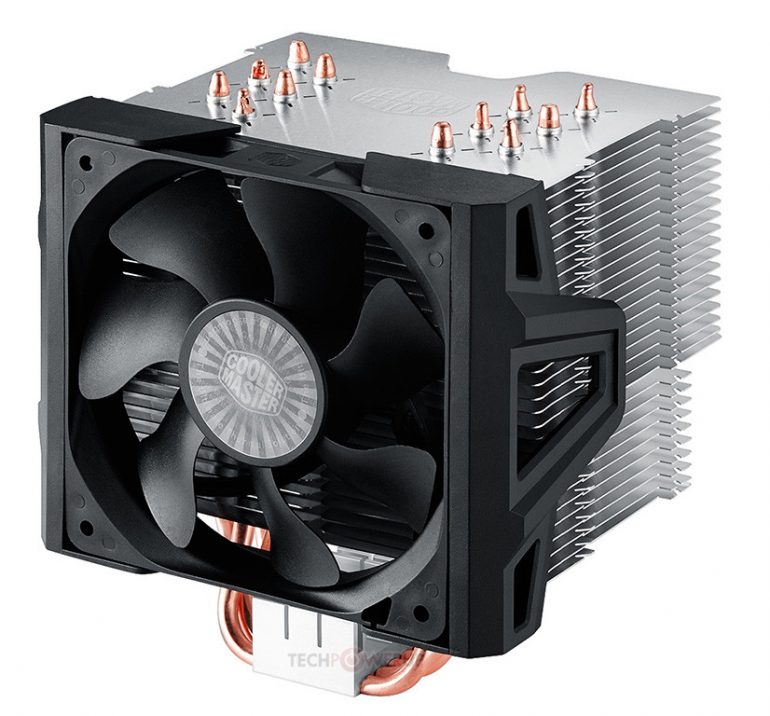 The acclaimed designer and manufacturer of CPU cooling solutions, PC chassis, power supply units and gaming peripherals Cooler Master has announced the arrival of the Hyper 612 v2.0 CPU cooler. The new cooling solution offers a number of interesting tech features but unfortunately for some people it will be available within the European Union only.

As the name of the cooler shows the Hyper 612 belongs to Cooler Master’s Hyper line of CPU coolers that is known for its very aggressive price/performance ratio. Designed with versatility in mind the Hyper 612 v2.0 can be used as a passive cooler thanks to the implemented CDC and X-Vent technologies. CDC, which stands for Continuous Direct Contact, is a technology developed by Cooler Master that improves the contact and hence the heat transfer between the CPU and the heat pipes used. This allows better heat dissipation and lower CPU temps. The other technology – X-Vent – allows better airflow just by using the right angle for the air vents. Cooler Master says you can use the Hyper 612 as a passive cooler with CPUs that have TDPs of up to 95 watts.

The Hyper 612 v2.0 can also be used as a high-performance cooler in case of need. This is simple – just add an additional cooling fan to the one that is already on the cooler and thus you can use the Hyper 612 as a dual-fan solution. This will provide you with high airflow that will cool any processor there is. Four anti-vibration rubbers will keep the CPU cooler steady and vibration-free.

The Hyper 612 v2.0 supports all modern processors including all Intel LGA 2011, LGA 115x and AMD AM3+ and AMD FM2+ chips. In the EU the new cooler is already available at Cooler Master dealers for a price of around EUR 40.