ECS has officially unveiled the first FM2 socket motherboard. The new socket will host AMD’s new Trinity processors with desktop models expected later this year. Trinity is the latest AMD APU (accelerated processing unit) and is based on updated Piledriver cores as well as on an improved Radeon graphics processing unit.

The first FM2 motherboard carries the A85F2-A Deluxe product name and is based on the new AMD chipset – the A85 FCH, where FCH stands for Fusion Controller Hub.

Specs-wise the new motherboard boasts the standard ATX form factor. It comes with ECS Super Alloy chokes, MOSFETs cooled by a gold-colored heatsink, 4+1 phase VRM, an 8-pin EPS connector, four DDR3 DIMM slots that support up to 32 GB of DDR3 memory that can run in dual-channel mode at speeds up to 2600 MHz. There also are two PCI-E 2.0 slots with the first one being a full x16 PCI-E slot, while the second one runs at x8 borrowing eight lines from its neighbour. This two-slot PCI-E combination is good to work in AMD CrossFireX mode as well as in Hybrid CrossFire, which allows you to run a compatible mid-range Radeon HD 7000 series graphics card in tandem with the APU’s integrated graphics core. Other expansion slots include three PCI-Express 2.0 x1, and two legacy PCI slots. 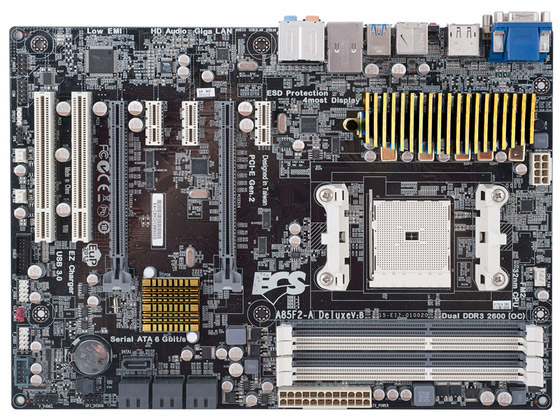 Eight SATA 3.0 ports, seven of which work as internal SATA ports while one works as eSATA, provide storage. Apart from IDE and AHCI, the A85 SATA controller supports RAID 0, 1, 5, and 10 modes. There’s also USB 3.0 on the board represented by six USB 3.0 ports – four of which reside on the rear panel and two are up front. The APU-integrated graphics controller gives out display through a range of display output connectors, including DVI, D-Sub, HDMI, and DisplayPort. The new platform supports triple-monitor Eyefinity for productivity. 8+1 channel HD audio (VIA-made CODEC), and gigabit Ethernet (Realtek-made PHY), make for the rest of it.

The ECS A85F2-A Deluxe is expected to cost around 150 USD when it launches later this year. The company also plans to unveil more FM2 motherboards based on the older A75 and A55 chipsets, which happen to be compatible with the new FM2 socket.