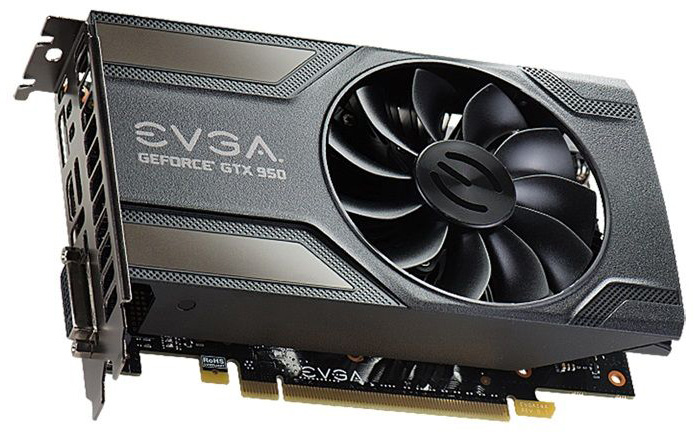 One of the best features of the GeForce GTX 750 and GTX 750 Ti video cards was the fact that both models did not require an external power source. Thanks to the excellent energy efficiency of NVIDIA’s Maxwell GPU architecture, these two cards could get all the power they needed via the PCI-E slot they were installed in. So in a few words gamers were able to get excellent 3D performance without worrying about the quality of their PSUs or the power bill. So when the successor to the GTX 750 generation – the GeForce GTX 950 – stepped in, there was some disappointment – the higher performance of this card meant it required an external power connector.

However things change and thanks to several tweaks now EVGA has four GTX 950 models that do not need extra power. All of them feature EVGA’s ACX 2.0 cooling system, measure 173 x 111 mm, feature HDMI 2.0/DisplayPort 1.2/DVI-I connectors in the back (two models have DVI-D connectors too) and take two slots of your motherboard/PC case. The GPU is also the same in all four models so expect to get 768 stream processors, 2 GB of GDDR5 memory and a 128-bit memory bus. The only difference is in the clock speeds, which you can see here, but there’s a price to pay – the four new EVGA models run at lower clock speeds to make sure they do not need extra power when compared to regular GTX 950 models. Here are the clock speeds in question:

Unfortunately there’s no information how much these cards cost.