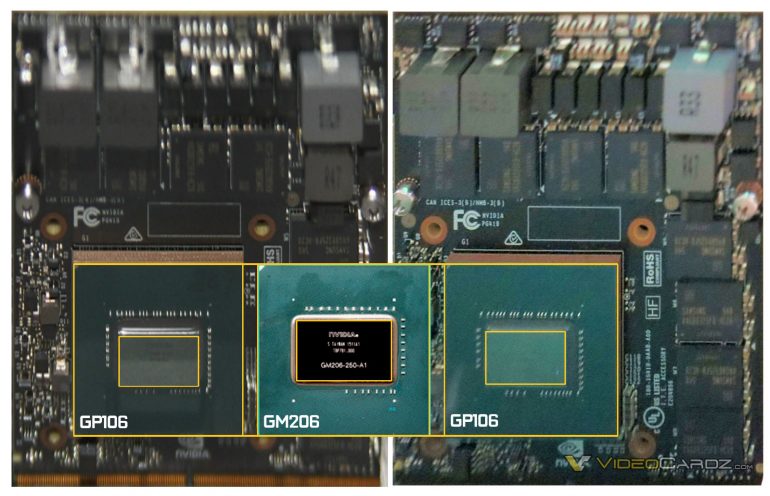 We all know that the launch of NVIDIA’s Pascal GPUs is imminent in the coming weeks so there’s a lot of speculation going on right now. The rumor mill was further fueled earlier today thanks to a new leak that shows how the GP104 and GP106 Pascal GPUs look like.

Starting with the GP104 GPU we can say that the chip comes with the traditional component layout of a simple GPU die that sits on a conventional fiberglass substrate package with all the memory chips surrounding the GPU. The chip will hardly use HBM2 memory, which seems to have been reserved for the high-end GP100 GPU only. The GP104 includes four graphics processing clusters and measures 15.35 x 19.18 mm and it likely includes around 7.4-7.9 billion transistors. Cards based on GP104 will likely come with 8 GB of GDDR5 memory that runs at 8000 MHz (effective) and given that they come with 256-bit memory buses they will be able to enjoy memory bandwidth of 256 GB/sec. The chip itself will likely come with 2560 CUDA cores instead of the expected 4096 stream processors.

Unfortunately there’s little information on the GP106 GPU except that it will be a slower version of the GP104 and hence it will have fewer CUDA cores and fewer transistors. The GP106 seems to have just two graphics processing clusters, which give it a die area of around 170 – 200 sq.mm. and likely about 3.5 billion transistors.

NVIDIA will officially launch the Pascal generation at Computex 2016, which will take place in early June 2016.