A few weeks ago the famous memory maker G.Skill made headlines by announcing the super fast Trident Z DDR4 memory line which offered two options. The first one was a kit of two 4 GB memory modules, which ran at 4266 MHz and the second one was a 16 GB kit (2 x 8 GB) at 3600 MHz. The 16 GB kit offered enough capacity for modern apps and games but ran at the relatively slow (for ultra fast DDR4 memory) speed of 3600 MHz, which disappointed some hardware enthusiasts. Well, not anymore.

The Taiwanese company has improved just this – a new Trident Z memory kit offers both speed and capacity. The new 16 GB kit (2 x 8 GB) now runs at 4133 MHz and offers latencies of 19-25-25-45 clocks at 1.4V. This is a bit more than what other performance DDR4 memory requires but speed comes at a cost. The new memory, however, comes with black PCBs, which many people will like and is just 44 mm high, which will ease the installation of CPU coolers. In addition to this new and very fast DDR4 memory kit G.Skill has also unveiled new 8 GB memory modules, which run at 3600 MHz, 3733 MHz, 3866 MHz and 4000 MHz.

The new memory supports Intel XMP 2.0 but we cannot tell you how much it costs now. 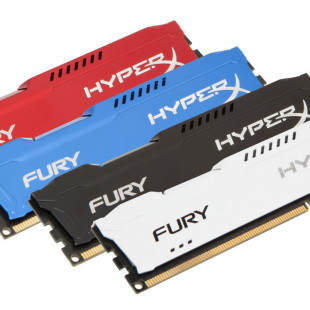 The famous memory maker Kingston has released a new brand of memory, known as Fury. The new memory line belongs to the HyperX series and promises great performance for entry level gamers and hardware enthusiasts. There something more to Fury though – the new line will retire the Kingston HyperX...

Sales of iPhone, iPad may get banned in Europe

A German court today banned sales of Apple’s iPhone and iPad which could mean that sales of Apple iOS devices may get banned across the European Union. The ruling was handed down by the Mannheim Regional Court in Germany. It relates to a patent infringement complaint filed by Motorola...