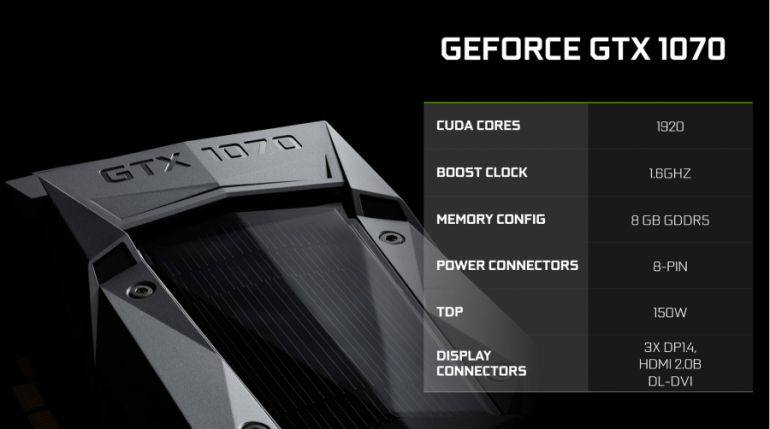 We now have the answer to this question – the Videocardz web site has published the tech specs of the GeForce GTX 1070. According to the provided information the GTX 1070 will come with a cut-down 16 nm GP104 GPU that will feature 15 SMX units enabled out of a total of 20. This means that the GTX 1070 will have 1920 CUDA cores, 120 TMUs and 64 ROPs. The card will sport 8 GB of GDDR5 memory at 7000 MHz with a 256-bit memory bus for 256 GB/sec of memory bandwidth. The nominal GPU speed is unknown but the GP104 chip will reach a maximum Turbo Boost GPU frequency of 1600 MHz. The GTX 1070 will reach 6.75 TFLOP/s of single-precision floating point performance and will come with TDP of 150 watts. The card will require additional power from an 8-pin power connector and will offer support for 2-way SLI as well as three DisplayPort 1.4 connectors and one HDMI 2.0b port. The cut-down GPU should then deliver at least 20 per cent less performance compared to the GTX 1080.