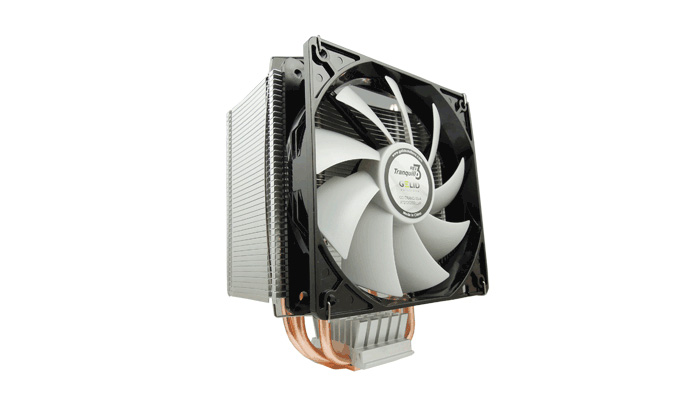 The manufacturer of various cooling solutions Gelid has presented the new third revision Tranquillo CPU cooler. Just like the original, the new cooler is based on four heat pipes that transfer heat in the best way possible. In addition there are a few improvements too.

As expected, one of the improvements includes better compatibility with modern motherboards. To achieve this, the engineers of Gelid have moved the heat pipes a bit. The 12V PWM fan has also been upgraded and now it has nine blades instead of seven and the blades have what Gelid calls a double layer design that further improves airflow. Thus the maximum airflow has been increased from 58 CFM to 63.5 CFM, while static pressure has also been improved. The downside is that the maximum noise level has been increased from 25.5 dBa to 26.5 dBa but Gelid says the Tranquillo rev3 CPU cooler is still capable of silent operation. Gelid also says the PWM integrated controller has been fixed and now it does not make a clicking noise that was affecting the previous model.

Thanks to a change in the fin shape that has made them more rectangular, the Tranquillo rev3 CPU cooler now allows you to add a second fan for push-pull configurations. The cooler comes with a single fan only but a second set of fan clips is now supplied so users can add any 120 mm cooling fan they can find. Compared to the Tranquillo rev2 CPU cooler, the third revision is just under 155 mm high, which means excellent case compatibility, and has depth of just 64 mm excluding the fan and an increase in width from 125 mm to 139 mm to compensate the lost surface area. The cooler weighs 585 grams.

The Tranquillo rev3 CPU cooler is compatible with all Intel LGA 775/1366/115x processors and all AMD AM2/AM2+/AM3/AM3+/FM1/FM2 chips. You can also add LGA 2011 support with Gelid’s dedicated mounting clips but they are sold separately. On AMD sockets it can also be installed in four directions.

The price of the cooler is USD 39 or EUR 29, depending on where you live – this money gets you the cooler, some GC-2 thermal compound and a 5-year warranty.