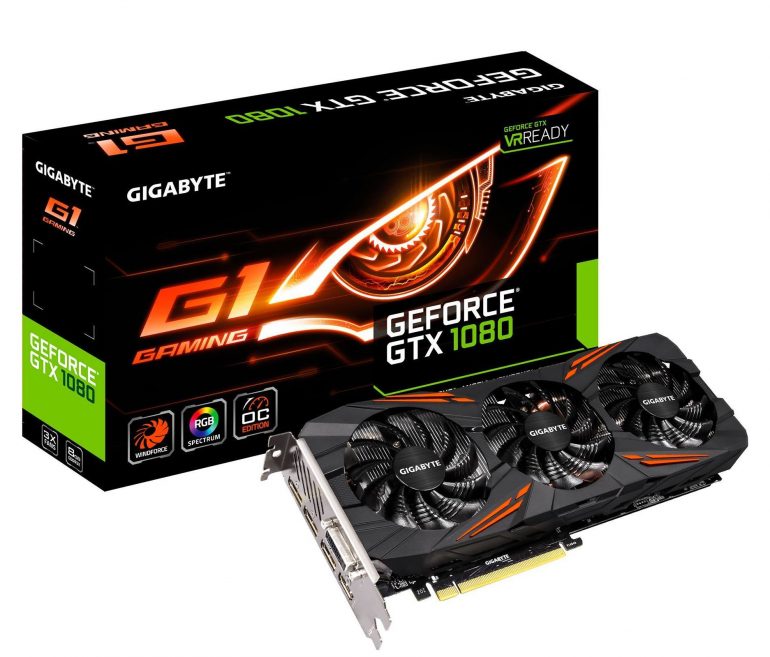 After the initial launch of reference-type GeForce GTX 1080 graphics cards, manufacturers now start to introduce modified versions of NVIDIA’s latest flagship. Gigabyte may have, in fact, become the first company to come up with such a card – the acclaimed Taiwanese hardware maker has just announced the GeForce GTX 1080 G1 Gaming graphics card.

Obviously this one is targeted at gamers but it also comes with innovative features and improvements here and there. The new card, also known as GV-N1080G1 GAMING-8GD, comes with RGB illumination, WINDFORCE 3X cooling, a technology called Super Overclock GPU and two operating modes – Gaming mode and Overclock mode. Gigabyte has covered the new card with a black shroud with orange accents that look really cool. In addition to this the Gigabyte LED logo is available in full-spectrum RGB with a choice of 16.8 million colors and customizable lighting effects. The GTX 1080 G1 Gaming features Gigabyte’s Xtreme Engine utility as well, which overclocks the card with a single mouse click. The card is also equipped with an 8+2 phase power design system for load balancing that improves the card stability and keeps certain card components cool and in case there’s something wrong the card will light up a smart power LED indicator that will inform users of the issue. The rest of the tech specs are pretty standard – the card is equipped with 8 GB of GDDR5X memory that runs at 10010 MHz and sports a Pascal GP104 GPU, which operates at 1695 MHz (1835 MHz Boost) in Gaming mode and at 1721 MHz (1860 MHz Boost) in Overclock mode.

There’s no information how much the new Gigabyte GeForce GTX 1080 video card costs.