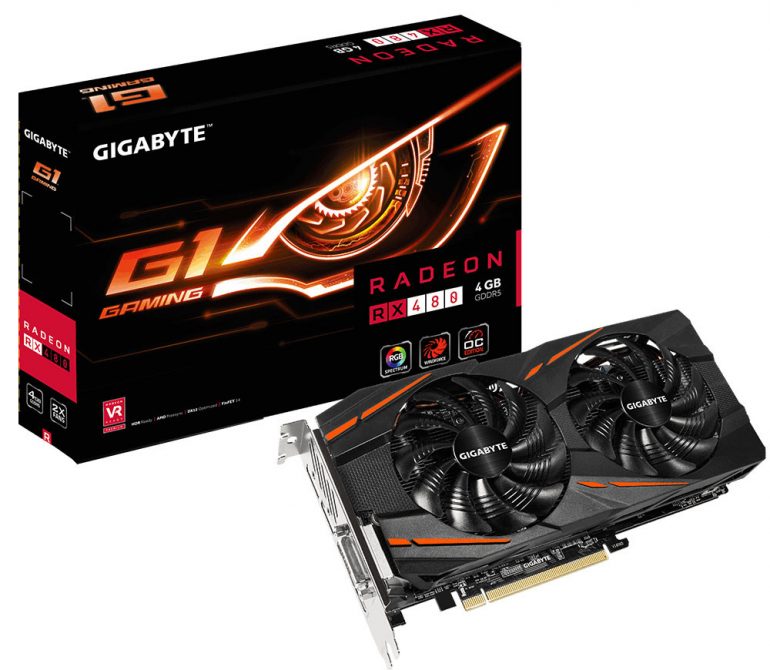 Gigabyte has announced the rumored Radeon RX 480 G1 Gaming video cards, which were in the news a week ago. As expected earlier there are two models – with 4 GB and 8 GB of GDDR5 memory. They are called RX480G1 GAMING-4GD and RX480G1 GAMING-8GD, respectively.

Both models feature the latest Polaris architecture and 14 nm FinFET production process. The specs of these video cards also include the efficient WINDFORCE 2X cooling system, which comes with two 90 mm cooling fans that work over three composite copper heat pipes, which directly touch the GPU. The airflow is also enhanced by a unique blade fan design, which increases the cooling capacity by 23 per cent, while reducing turbulence to the minimum. The cooling fans are turned off when under low loads or when the graphics card is idle, which further eliminates noise and even saves some energy. The cards are backed by a 6+2 power phase design for load balance that effectively extends the stability and longevity of the cards. In addition there’s RGB lighting with up to 16.8 million customizable colors and numerous lighting effects that can be controlled via special Gigabyte software. This software program also allows for one-click overclocking.

It is unclear how much the new Gigabyte Radeon RX 480 G1 Gaming video cards cost so check with your local Gigabyte retailer.