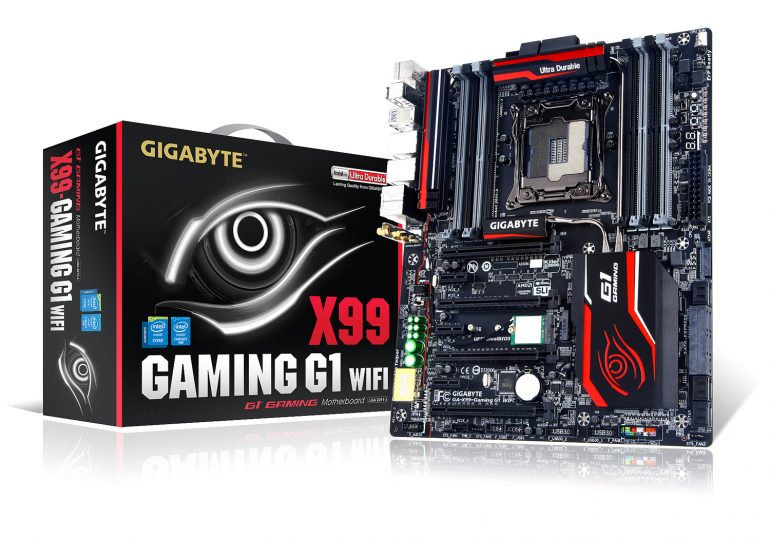 With Intel’s Haswell-E processors getting closer by the day, more and more X99-based motherboards pop up here and there. Last week we saw MSI’s first attempt at offering an Intel X99 motherboard and now it seems it is Gigabyte’s time to do so. Given that ASUS and ASRock are serious motherboard players too, we expect their models to appear any time soon, but unfortunately this is not now.

Back to the first Gigabyte X99 motherboard – it is called X99 Gaming G1 WiFi and as the product name suggests it targets gamers and sports Wi-Fi on-board. It does come with a ton of features and we will mention some of them here – the X99 Gaming G1 WiFi comes with the latest LGA 2011-3 socket that provides support for Intel Haswell-E processors, eight DDR4 memory slots for quad-channeled DDR4 memory, four PCI-E 3.0 x16 slots and three PCI-E x1 slots. By looking at them you will find out that there’s a wireless radio in between the slots and a M.2 SSD slot. In addition two SATA-Express and six SATA 3.0 ports provide storage connectivity; if the SATA-Express ports are not used then you get extra four SATA 3.0 ports. The entire motherboard is powered via a standard 24-pin ATX connector and a single SATA power connector. There’s also integrated audio in the motherboard.

There’s no official release date for the X99 Gaming G1 WiFi but we suspect the motherboard will be in your local hardware store next month when DDR4 and Haswell-E debut officially. The price of this motherboard is also unknown.