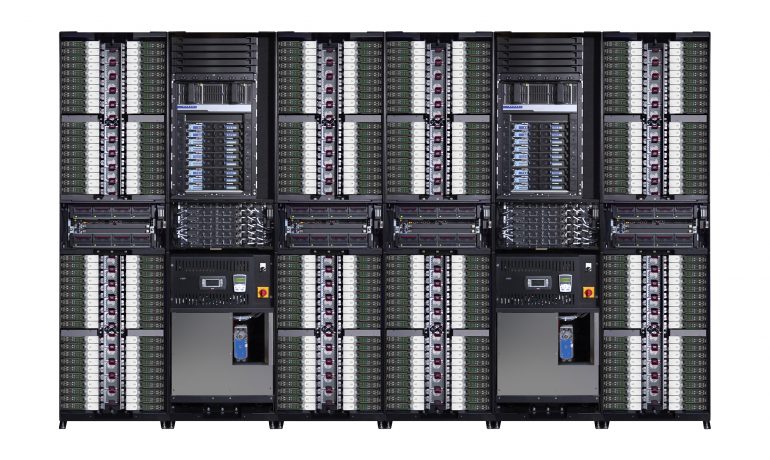 The popular US maker of computers HP has announced the new Apollo line of high-performance computing systems designed to satisfy the needs of anyone and any company that needs super computer capabilities in less space. In addition to that the new HPC systems deliver up to four times the performance of standard rack servers while using less energy.

Currently there are two models in the line – HP Apollo 6000 and HP Apollo 8000. The first one is an air-cooled system with ProLiant XL220a server trays that have been designed for single-threaded applications. The system consists of a modular 5U chassis that will hold up to 10 trays with each tray containing up to two ProLiant XL220a servers. The maximum number of servers that can be supported is 160; they can be housed in a single 48U rack. An external power shelf will support up to six Apollo 6000 chassis or up to 120 servers. There are two power shelves – the first one is rated at 2650W while the second one is rated at 2400W. Both are Platinum hot-plug power supplies.

A single ProLiant XL220a server comes with an Intel Xeon E3-1200 v3 quad-core processor at 3.7 GHz (4.1 GHz Turbo) and supports up to 32 GB of memory and up to 2 TB of storage per server. Each server has one GbE and one 10GbE port, two PCI-E slots and two PCI-E x8 3.0 expansion slots. These servers also make use of HP’s integrated Light-Out firmware for advanced power management.

The HP Apollo 8000 is a high performance line of servers that are liquid-cooled. This more efficient way of cooling allows the addition of more servers per rack compared to air-cooled designs. Thus the Apollo 8000 has racks that can contain up to 144 servers. Each rack can pack up to 72 trays with each tray having up to two HP ProLiant XL730f servers. In addition to that there’s a technology that protects the servers from leaks and the liquid used for cooling.

Each ProLiant XL730f server comes with an Intel Xeon E5-2600 processor and supports up to 256 GB of DDR3 SDRAM along with the upcoming DDR4 memory standard. Storage is provided in the form of a single SSD with a capacity of 80 GB or 120 GB. There’s also network hardware that provides 1 GbE per server.

The HP Apollo 6000 and 8000 models are available now directly from HP. Pricing is provided upon request.