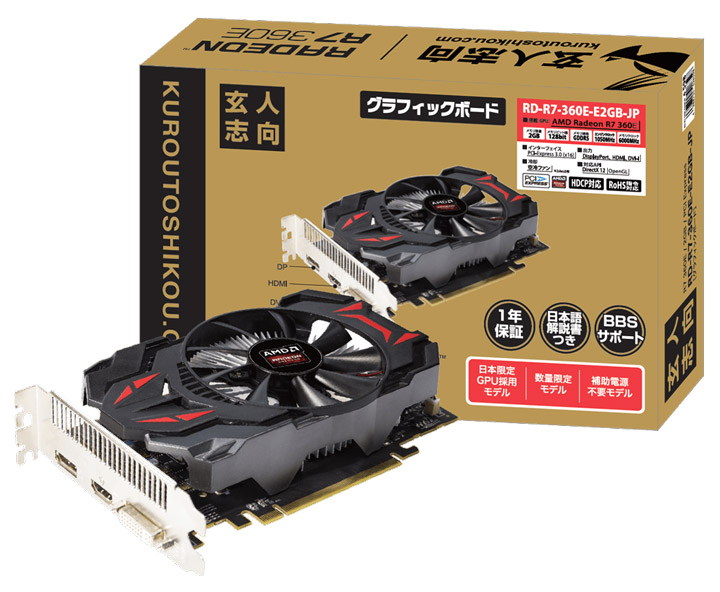 The new video card is called Radeon R7 360E and is an energy-efficient version of AMD’s Radeon R7 360 video card. This is the reason why the new card comes without an additional power connector which contradicts AMD’s specifications, which require the presence of a supplementary 6-pin connector that provides all the necessary power to the R7 360. To achieve the aforementioned energy efficiency Kuroutoshikou has used hand-picked Tobago Pro GPUs that require less power than others and has placed them onto the R7 360E. Regular R7 360 cards need at least 100W of power, hence the additional power connector, but this is not the case with Kuroutoshikou’s video card.

Being cool and energy efficient has a price, though, and here we are not talking about money. The new Radeon R7 360E (codenamed RD-R7-360E-E2GB-JP) comes with slower memory compared to regular R7 360 models. In the case of Kuroutoshikou’s video card the memory runs at 6000 MHz effective, while reference R7 360 cards sport memory at 6500 MHz. The core clock of the GPU has not been changed, though, and here it runs at the usual 1050 MHz. The Radeon R7 360E sports 768 GCN 1.1 stream processors, a 128-bit memory bus and 2 GB of GDDR5 memory and all this hardware gets cooled by an aluminum heat sink, which has a 90 mm cooling fan on top. In the back users will find three ports that include DVI-I, HDMI and DisplayPort.

In Japan the new card sells for around USD 99. Would you buy one if you could?