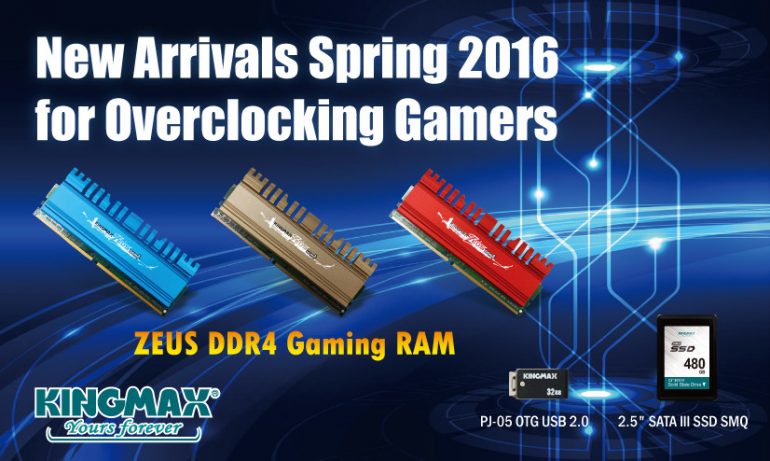 The Taiwanese memory maker Kingmax has announced its new Zeus DDR4 memory, which was first leaked at the end of January this year. The new memory line is designed for gamers and overclockers and includes memory modules with capacities of 4 GB, 8 GB and 16 GB as well as dual-channeled kits of 8 GB, 16 GB and 32 GB.

Kingmax Zeus runs at 2800 MHz, 3000 MHz and 3200 MHz, depending on the memory model chosen, and features CAS latencies of 14 clocks, 15 clocks and 16 clocks, respectively, but this is normal since higher speed memory needs more relaxed timings to work properly. The Zeus DDR4 features aluminum heat spreaders that are colored in red, silver or blue colors but even with the heat spreaders on, the memory modules are not higher than 5 cm so they should not interfere with the various CPU coolers that are on the market now. The Zeus DDR4 also supports Intel XMP 2.0 and is fully compatible with the Intel Z170 chipset.

Along with Zeus DDR4, Kingmax has announced the Zeus DDR3 memory, which performs the same role but for people with computers running DDR3 memory. The Zeus DDR3 runs at 1600 MHz, 1866 MHz and 2133 MHz and features capacities of 4 GB and 8 GB but the new DDR3 memory sports CAS latencies of just 11 clocks for all models. In addition the Zeus DDR3 is certified to work fine with the DDR3L memory controller inside Intel’s Skylake processors.

The prices of the Zeus DDR3 and Zeus DDR4 memory modules and kits are unknown as of now, which is also true for the launch day.