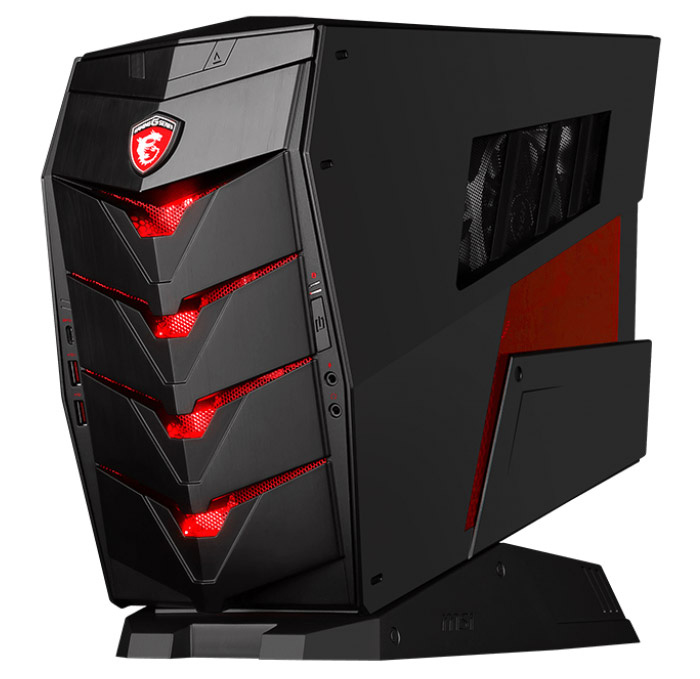 A month after announcing the Vortex gaming computer, MSI has introduced the Aegis desktop gaming PC. The new computer comes with a chassis that resembles a samurai sword and this is one of the things that should capture your attention or so MSI believes.

The base configuration of Aegis measures 433 x 170 x 376 mm (L x W x H) and weighs 10.5 kilograms, which is not little. The Aegis has its PSU situated at the bottom, while the video card inside the computer is parallel to the motherboard, which is unusual. The Aegis will be available in two configurations – the first will have an Intel Core i7-6700 processor, while the second one will sport an Intel Core i5-6400 Skylake chip. Both models will use an unknown motherboard with the Intel B150 chipset, up to 32 GB of DDR4 memory, an M.2 SSD plus up to two 3.5-inch hard drives and one 2.5-inch hard drive/SSD, GeForce GTX 970 or GTX 960 graphics with 4 GB of VRAM, a 7.1-channeled audio chip, Bluetooth 4.2, Realtek 8111H LAN hardware and Windows 10 Home. In addition to this Aegis will have two USB 2.0 ports in the back, four USB 3.1 Gen 1 ports in the rear and a 350W 80 Plus Bronze PSU. But there’s a catch – the Aegis comes with no storage drives or RAM memory modules so you will have to purchase them separately.

No word on pricing as of now but should you want an Aegis PC, you should prepare some more money.