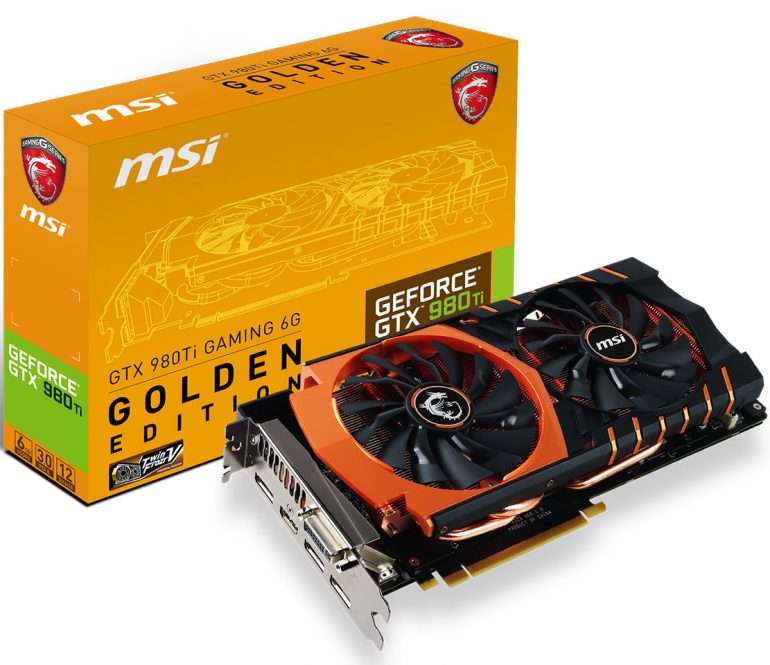 The GeForce GTX 980 Ti is, undoubtedly, a very fine video card, despite being very expensive. That’s why we keep on getting more and more GTX 980 Ti models four months after this card was first released. Today it is MSI day – the Taiwanese company has presented the brand-new GeForce GTX 980 Ti Golden Edition.

The new video card does not have that much gold to satisfy your needs but it comes with tons of yellow and orange colors, hence the name. In fact the MSI GTX 980 Ti Golden Edition offers a really nice yellow box that allows the card to be easily distinguished among competitors. In addition this limited edition card has a copper heat sink and gold-colored panels as well as higher clock speeds. The card runs at 1190 MHz for the GPU and reaches 1291 MHz in GPU Boost mode, while the GDDR5 memory operates at 7096 MHz, up from the 1178/1279/7010 MHz combination of the standard red and black GTX 980 Ti Gaming card. Moreover the new MSI GTX 980 Ti Golden Edition has a large copper heat sink with exposed copper pipes, compared to the aluminum fin heat sink with nickel-plated heat pipes on the standard GTX 980 Ti Gaming, which results in better heat dissipation and the addition of the nice looking color of red gold. Overall the card looks great thanks to its golden color and it also offers better performance than many other GTX 980 Ti cards.