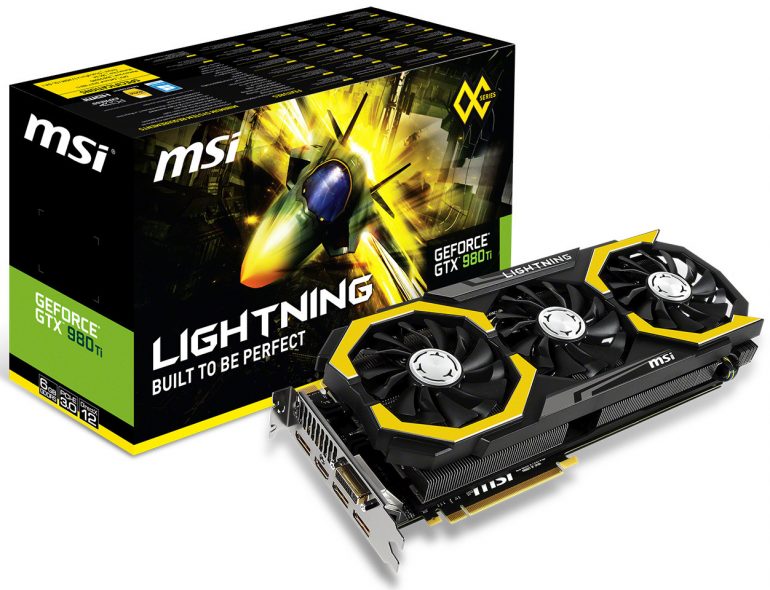 MSI has presented what seems to be the fastest GeForce GTX 980 Ti graphics card as of now – the MSI GeForce GTX 980 Ti Lightning. The card comes with Twin Frozr cooling, factory overclock and an original design that catches the eye.

The GeForce GTX 980 Ti Lightning includes NVIDIA’s most powerful GM200 Maxwell core and comes with 2816 stream processors that run at 1203 MHz (1303 MHz Turbo). The card has 6 GB of GDDR5 memory that operates at 7096 MHz and thanks to the 384-bit bus that serves the memory, the bandwidth that the GeForce GTX 980 Ti Lightning offers is 336 GB/sec. Since the card consumes a lot of power it comes with two 8-pin power connectors and one 6-pin power connector and in the back it has three DisplayPort connectors, one HDMI port and one DVI-I port. There are two SLI connectors as well.

The GeForce GTX 980 Ti Lightning uses only high-quality Military Class 4 components, Dark Cap capacitors and Super Ferrite chokes. The Twin Frozr cooler includes three  92 mm Torx fans with independent control and reverse operation for easy dust cleaning. There are three 8 mm SuperPipes as well that transfer heat quickly to the heat dissipation fins. As a result the GTX 980 Ti Lightning cooler can dissipate up to 700W of heat. The installed Twin BIOS makes sure you can reach overclocking records without special hardware modifications.