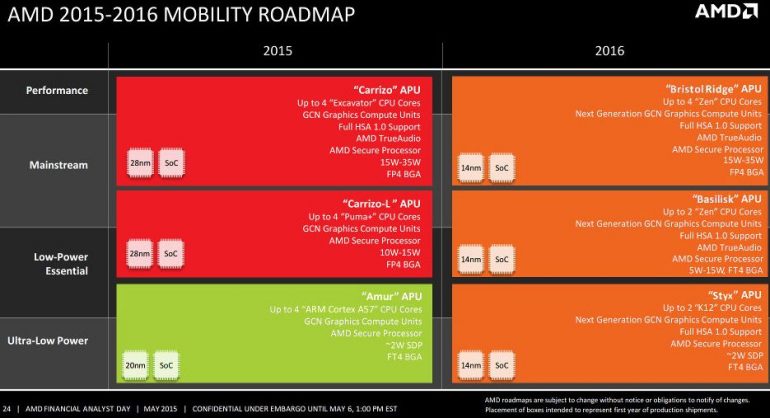 We have had an interesting week so far when it comes to AMD due to a single reason – every day we got a new leaked slide that described its upcoming Zen processors in more details. This day will be no different – this time the world has received a new slide that describes AMD’s plans for the near future.

And the plans seem to be more than serious! After nearly a decade spent in Intel’s shadow AMD plans to release a number of new and highly competitive chips in the near future. The first and most important change is that the current AM3+ socket goes into history in favor of the upcoming FM3 socket. In May 2015 AMD will present the rumored Godavari processors that will be an improved version of the current Kaveri APU generation. The Godavari chips will be built on 28 nm production process and will keep the FM2+ socket, offering Steamroller cores and an integrated GCN graphics core.

While the Godavari chips will be an interesting technological achievement the real AMD show will start in 2016 when the company will present its innovative Zen architecture. Zen will be featured in a number of chips. We will get the so-called Summit Ridge processor, which will be a regular CPU with no integrated graphics as previously reported. Summit Ridge will offer up to eight “real” Zen cores on 14 nm tech process and will require the upcoming FM3 socket. Summit Ridge will then be followed by a new chip generation called Bristol Ridge, which will be a Zen processor with up to four cores, a new generation GCN graphics core, HSA 1.0, and AMD TrueAudio. Bristol Ridge will use the same FM3 socket, which means you can exchange your Summit Ridge chip with Bristol Ridge with no effort at all using the same motherboard.

Apart from these two desktop Zen processors AMD plans to introduce Zen in the mobile segment as well. Users on the go will get new hybrid chips called Basilisk that will be dual-core Zen processors that will use the all-new FT4 socket. Basilisk will consist of chips with TDP of 5-15W which is pretty impressive. In addition to this generation Bristol Ridge will also be available as a mobile chip – it will have up to four cores and will sport TDP between 15-35W using the same FT4 socket. Both chip generations will be made on 14 nm process.

There’s another mobile chip too and it is called Amur – this one will have four ARM Cortex-A57 cores, an integrated GCN video chip and a cryptographic co-processor. Amur will be made on 20 nm process and will use 2W of power in the aforementioned FT4 socket. Until then we will have to do with the upcoming Carrizo and Carrizo-L processors that we have described on our web site.

Finally in 2016 AMD will release the Styx processor that will have two ARM computational cores with the K12 architecture and GCN graphics of a new generation. Styx will have HSA 1.0 and will include a cryptographic co-processor too. The chip will have TDP of 2 watts and will use the FT4 socket.

One thing is for sure – 2016 will be an exciting year for AMD and computer users.