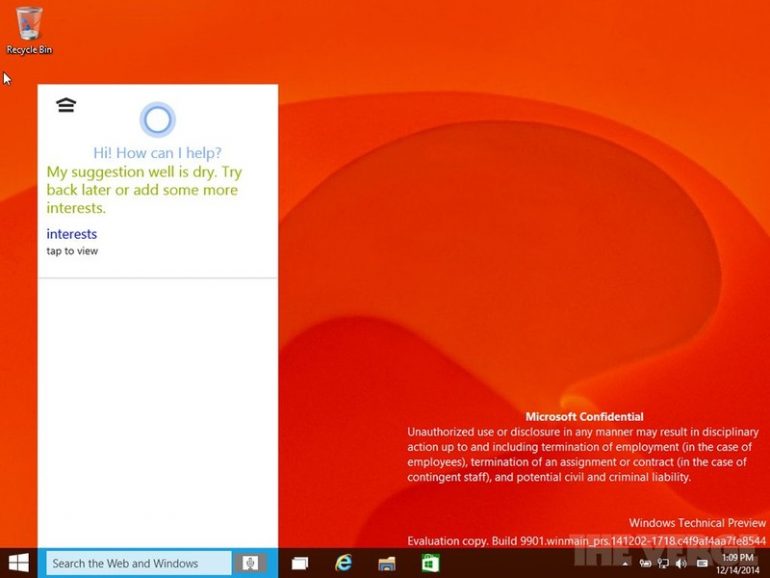 January 2015 will be a big month for Microsoft since the well-known software company plans a huge Windows 10 event, scheduled for January 21. The main goal of the event is to present the first consumer-oriented preview version of Windows 10 and to discuss a number of new features that will appear in this version for the first time.

While Microsoft is busy with the upcoming event a new Windows 10 build has been leaked. Known as Windows 10 Build 9901 the new piece of software demonstrates some of the features that will appear next month. The first big addition to the new build is Cortana and given you obtain the software you will see Cortana sitting at the top of the search interface and responding to text and voice commands. The feature is not 100 per cent functional but it is there and will show you how it works and what you can expect from it.

Moving down the line the new build comes with a new Xbox application that seems to act like a gateway to the entire Xbox ecosystem as it gives access to achievements, activity feeds, friend lists and, of course, the Microsoft Store. The Calculator application has also been updated. Of course, all these are early versions and they are likely to change more and more before the official debut of Windows 10, expected sometime in 2015.

The rest of the new features include new animations in the Taskbar switcher in Windows 10 and a changed Control Panel that looks very much like the same panel in earlier Windows versions. The Settings button has also been removed from the Charms Bar, which makes it easier for consumers to get to the settings of Windows 10. The last new feature is hidden in the Windows Store, which has been changed somewhat thanks to a new beta app that is built-in. Now TV shows, movies and music are included alongside apps and games. This might mean that Microsoft will soon integrate all Xbox features in the main Windows Store to offer all content in a single location.

Windows 10 will be the next Windows version. Expected in 2015 the new OS will have the hard task of improving the Windows image around the world and to do that it will come with numerous new features and functions. In addition the new OS might come as a free upgrade to current Windows 8 users.