Having won the high-end battle against AMD with its latest GeForce GTX 690, GTX 680 and GTX 670 video cards, NVIDIA is now looking for a way to sell Kepler cores in the low-end market, which does not seem to be a difficult task if we trust the latest rumours that have surfaced on the Internet.

According to them the GPU chip giant will unveil the GeForce GT 640 – a lower end graphics card – at Computex Taipei, which starts next week in Taiwan. Official specs are still unknown but the graphics card is expected to come with a GK107 chip, which will power all budget-oriented Kepler cards in the future including the rumoured GT(X) 640, 650, 655 and 660. The core will run at 950 MHz and will sport just 384 CUDA cores that will be fed by 1 GB or 2 GB of GDDR5 memory on a 128-bit bus. 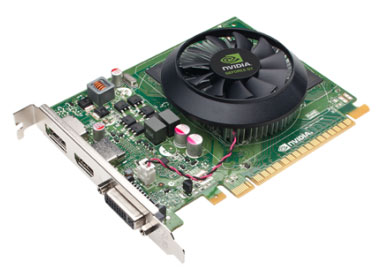 Another peculiarity of the expected newcomer is that it will be very small in size measuring just 5.7 inches in length.