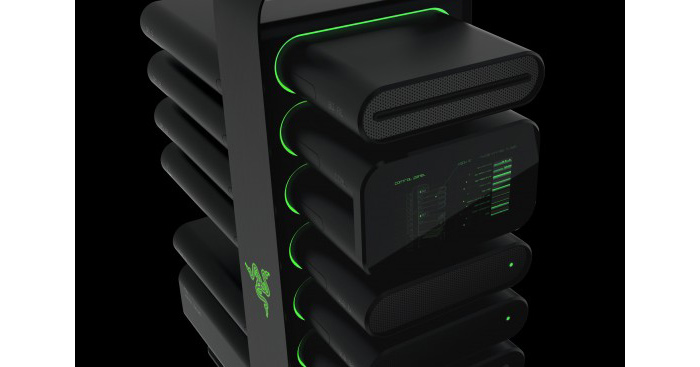 “Project Christine is a new concept design that will revolutionize the way users view the traditional PC. This is the first gaming system that is able to keep pace with technology and could allow consumers to never buy another PC, or gaming system, again. We have a history of bringing incredibly innovative concept systems to market and it’s fair to say that Project Christine is a very exciting new prospect for future development,” said Min-Liang Tan, Razer co-founder, CEO and creative director.

While PCs can be built one component at a time, the new Razer creation makes it possible for all kinds of end users to build their own PCs with minimum effort. In addition they will be able to select and install modules on the fly, no matter if it is a microprocessor, a new memory module or a new graphics card, hard drive, you name it. This flexible and modular design will eliminate the need to purchase all-new systems by allowing users to gradually upgrade systems. In addition Christine comes with some advanced PC technology such as quad-SLI multi-GPU graphics, support for multiple SSD and storage components in RAID and more. Christine goes one step further and offers active liquid cooling, noise cancellation and factory overclocked components too. The system also features a touch-screen LCD monitor that shows crucial information such as on maintenance.

So far so good except for one thing – the modular nature of Christine hints of module availability only by Razer for now which would mean higher prices and lower availability. All in all, however, the new Razer creation is a great idea that may soon find market acceptance.