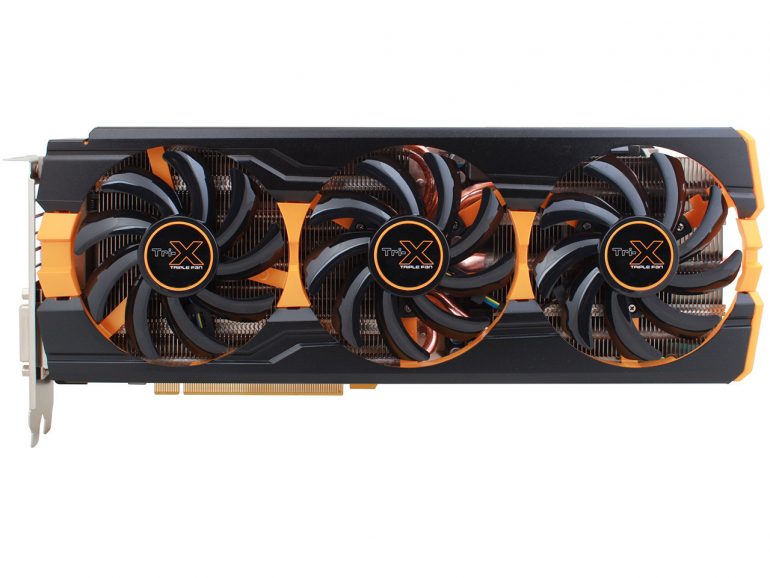 The Sapphire R9 290X Tri-X 8 GB offers 2816 stream processors at the increased engine clock speed of 1020 MHz. The installed 8 GB of GDDR5 memory sports a 512-bit memory bus and runs at effective 5500 MHz for better memory bandwidth compared to older models. The card also comes with an original Sapphire PCB, a 6-phase power design that delivers up to 240W of power (40W per phase) and two 8-pin power connectors. The card needs up to 375W of power including the power provided by the PCI-E slot.

The installed Tri-X cooler offers a 10 mm heat pipe in addition to four subsidiary heat pipes that ensure even heat distribution throughout the heat sink assembly. The three fans have dust repelling bearings now each with dual ball races. They are equipped with aerofoil section blades to deliver highly efficient airflow at low noise levels, and the fan cowling is designed to control the routing of the airflow for maximum cooling efficiency. Nice, huh?

The rest of the features of this new card include everything you would expect from such a card – support for PCI-E 3.0, support for AMD CrossFire, AMD TrueAudio technology for better audio immersion, support for 4K displays and AMD Eyefinity, Dual BIOS and more.

The card is available now. No word on pricing but if we take the cooling into account, the Tri-X card should be cheaper than the Vapor-X version.