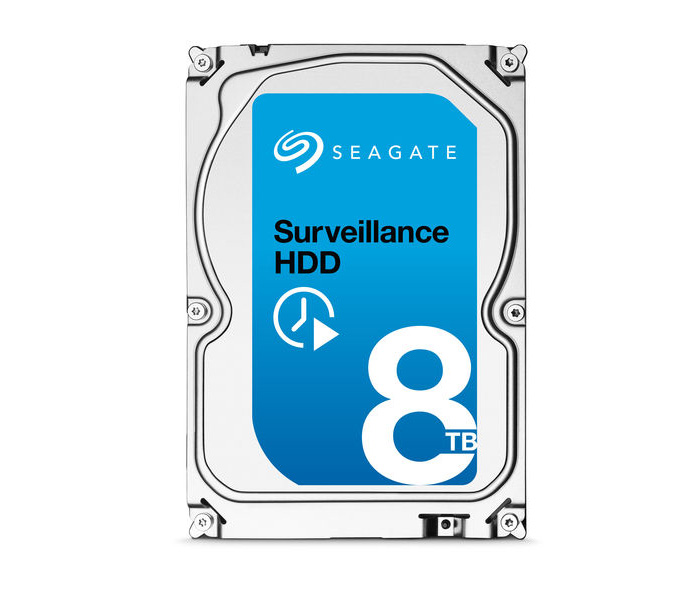 While you might still use an old 500 GB hard drive and be completely satisfied with the capacity it offers, there are people whose hunger for storage capacity can never be satisfied. It’s easy to guess who needs as much capacity as possible – people who deal with video surveillance – and to serve their needs in an even better way Seagate has announced a new 8 TB hard drive that has been designed exactly for this.

The new 8 TB hard drive belongs to the company’s Surveillance HDD line and has enough capacity to hold up to 800 hours of HD content captured by up to 64 different cameras simultaneously. Apart from the increased capacity the 8 TB Surveillance HDD hard drive features performance improvements as well – it reaches a top speed of 230 MBps while older drives of the same line with capacities of 6 TB, 5 TB, 4 TB, 3 TB, 2 TB and 1 TB top out at 180 MBps. The 8 TB model also has 256 MB of cache, while the older 5 TB and 6 TB models have 128 MB of cache (64 MB for the 1 TB – 4 TB hard drives of the same line). The drive comes with 300 000 load/unload cycles, which is comparable to most NAS-class hard drives.

Apart from these performance-increasing features the new 8 TB model keeps some of the specs of the previously released models – the drive comes with serious anti-shock and anti-vibration characteristics, 1 million hours of MTBF and an optional 3-year data recovery service for the drive. Just like older drives of the same line the new Surveillance HDD hard drive is optimized for 24/7 operation and conforms to the 180 TB-per-year workload rating requirement for such hard drives.

The new 8 TB model will arrive in stores in November. There’s no information how much the drive will cost.