Building a Haswell-E-based PC is not easy – the parts are here but they are expensive and the mandatory DDR4 memory is not that abundant on the market as of now. But if you live in Europe you are now one step closer to having the latest and greatest Haswell-E hardware inside your case thanks to Team Group, which has launched new DDR4 memory modules that run at 2667 MHz.

Quite logically the new memory targets hardware enthusiasts and overclockers and is available as kits as large as 64 GB (4 x 16 GB). Offered in both Team Dark Series and Team Vulcan Series the memory supports Intel XMP 2.0 profiles and is ready to output some great performance for you. The modules run at 15-15-15-35 or 16-16-16-36 latencies and feature large aluminum heat sinks that reduce the operating temperatures.

The new memory is available now. No word on pricing.

SANYO Electric Co., Ltd. , a world leader in battery technology, is pleased to announce that SANYO will supply the nickel metal hydride (Ni-MH) battery systems for hybrid electric vehicles (HEV) to PSA Peugeot Citroën, one of the largest car manufacturers in Europe. PSA Peugeot Citroën will...

MSI, in the spirit of quickly creating and releasing new innovations, has incorporated the Winki online environment - just announced at CeBIT 2009 - as a key feature in its new AM3 790FX and 790GX mainboards. Transforming the mainboard into a tool anyone can use, MSI's independently developed... 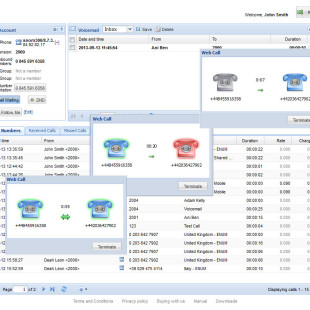 What should you know about internet telephone systems?

If you want to pay less for your business telephone system you should consider VoIPstudio's hosted PBX. Every entrepreneur looks for cheaper and more flexible way to develop their company's telecommunication's structures. Now, with the aid of VoIPstudio, you will not have to buy any expensive...