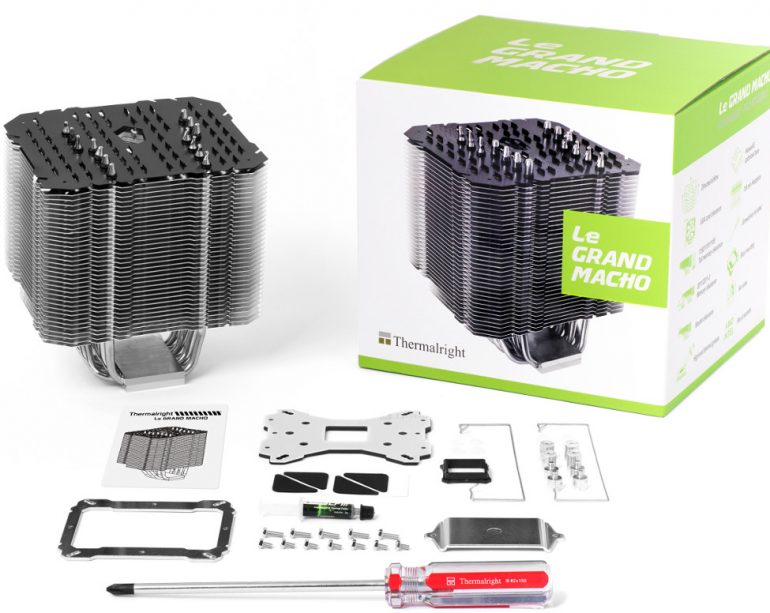 Thermalright has introduced one more CPU cooler that this time comes with the rather catchy and nice (at least to us) name of Le Grand Macho. As you can see the name of the device suggests that we are dealing with a mighty cooler here and indeed we are – in active mode the Le Grand Macho can cool processors with TDP of up to 300 watts!

The new Le Grand Macho is a larger version of the original Macho, although it has much in common with the HR-22 cooler, which was released back in year 2013. The new Thermalright cooler measures 150 x 125 x 159 mm (L x W x H) and weighs 900 grams, which means it will likely need larger PC cases to work in. It has seven 6 mm copper nickel-plated heat pipes, a nickel-plated copper base and 35 fins for the heat sink, which are 0.4 mm thick. The cooler supports memory modules that are as high as 46 mm and has two work modes – passive, in which a cooling fan is not needed, where it can cool chips with TDP of up to 95 watts and active mode, in which it can cool 300W TDP processors thanks to the use of two 120 mm cooling fans in a push-pull configuration.

Dumb Ways to Die – fight for your life!