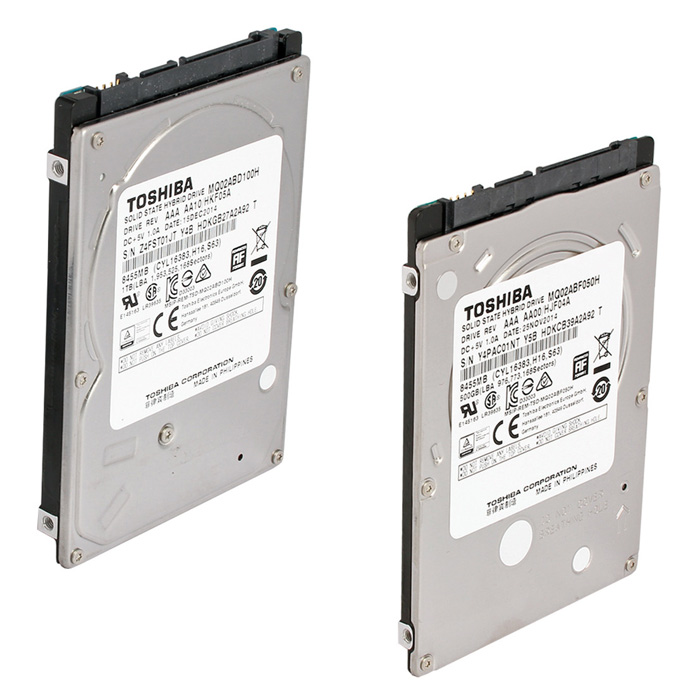 Toshiba has officially announced a new solid state hybrid drive (SSHD) line that comes with Toshiba’s own 19 nm second generation NAND flash memory. There are two models as of now – the MQ02ABD100H and the MQ02ABF050H.

The new drives will offer enhanced performance compared to traditional hard drives thanks to a large integrated cache memory, made of NAND flash memory cells, that is used as secondary cache during operations. Thus SSHD drives are faster than common hard drives but maintain large capacities at lower costs, unlike solid-state drives, which are more expensive and often offer lower capacities when compared to both SSHDs and hard drives. The new Toshiba drives feature another technological improvement – unlike older SSHD models from Toshiba, the new drives come with the NAND controller integrated in the main HDD controller chip. This solution enables more integrated management of both the NAND and HDD operations compared to older models. In addition the new drives offer defective block management, ECC (Error Correction Code), conversion of logical block address, wear-leveling and more features for both the NAND flash memory and the hard drive.

The Toshiba MQ02ABD100H and MQ02ABF050H drives will be commercially available in February 2015. The price list has not been announced as of now.