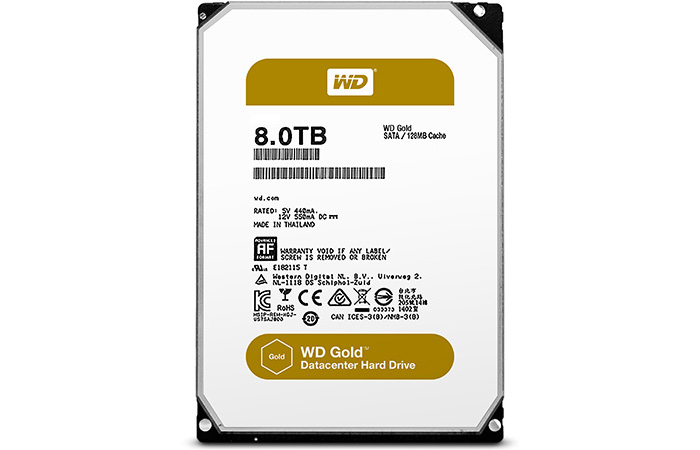 Western Digital has surprised both its competition and customers with the announcement of the all-new Gold line of hard drives. The new Gold line now joins the existing Blue, Red, Black, and Purple hard drive lines and targets specific usage scenarios.

The Gold line includes only 3.5-inch hard drives as of now that have been specifically optimized for datacenters. They can be used in small-sized or large servers as well. The Gold line now consists of three models only – WD8002FRYZ, WD6002FRYZ andWD4002FYYZ – which offer 8 TB, 6 TB and 4 TB of capacity, respectively. All drives in the line spin their platters at 7200 rpm and use the latest SATA 3.0 interface. Thanks to special optimizations, new software and new electronic components inside Gold hard drives, WD believes that these drives are the best the company has ever produced. Performance-wise they should also be 15 per cent faster than what the competition has to offer. The 8 TB and 6 TB models also pack additional nice features – the 8 TB model for instance is full of helium, which reduces the overall power consumption by 26 per cent. The 6 TB model features NAND memory as cache. Speaking of this, all four models come with 128 MB of cache and MTBF of 2.5 million hours.