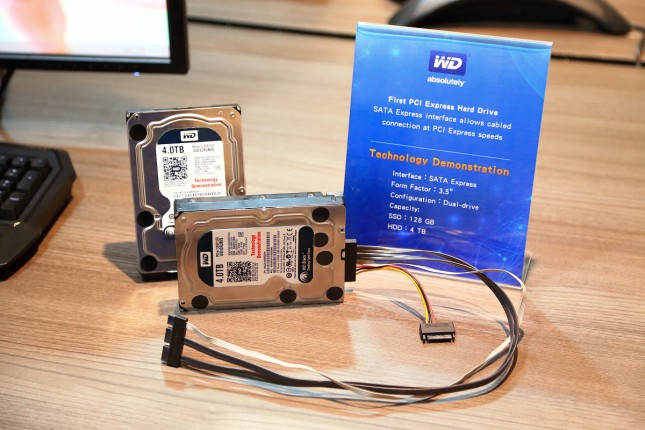 As it usually happens tech fairs and exhibitions are the place where numerous new technologies are unveiled. This year’s Computex 2014 is not an exception so if you happen to go there you might as well see Western Digital’s newest company product – a hard drive that comes with the newest SATA Express interface.

The new device does not have an official brand name as of now but it looks like a regular WD Black hard drive, save for the SATA Express interface. It comes in the quite common 3.5-inch form factor and offers 4 TB of capacity but there’s more to it.

You may think that this is it but if you do you will be mistaken. In fact things are a bit more complicated when it comes to this prototype hard drive. Underneath the chassis it also carries a 128 GB SSD but this is not a classic hybrid hard drive; instead it is a 2-in-1 device. Unfortunately WD did not test the pure hard drive performance and tests were limited to the SSD part only but this one did show some impressive performance – it reached 700 MB/sec of read speed and 500 MB/sec of write speed.

So far the famous US hard drive maker has not shared plans for mass production of such combo hard drives but they may as well appear later this year. One thing is for sure though – once SATA Express becomes widely adopted this interface will power some future hard drives. Will one land in your PC – this of course depends on their prices.