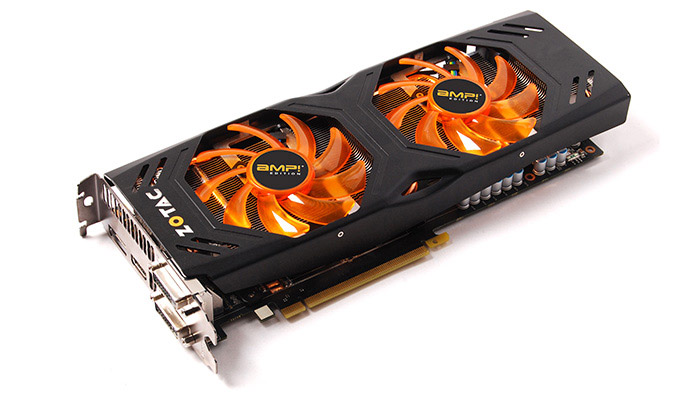 NVIDIA’s GeForce GTX 770 graphics card debuted just hours ago but major video card manufacturers already have modified versions of NVIDIA’s reference GTX 770 model. While there are many GTX 770 versions on the market now Zotac catches attention with its GTX 770 cards thanks to buffed up specs including the highest ever clock speeds seen in a GTX 770 video card!

Zotac has prepared three models of the GTX 770 with all of them using the same PCB and modified cooling that differs from the reference model. The Zotac ZT-70301-10P and ZT-70304-10P run at increased clock speeds (GPU 1059 MHz/1098 MHz, memory at 7000 MHz) with the first model offering 2 GB of GDDR5 memory while the second one doubling that to full 4 GB.

The most interesting model is the third one – the Zotac ZT-70303-10P Amp! Edition not only offers increased GPU clock speed (1150 MHz/1202 MHz) but the installed 2 GB of GDDR5 memory runs at record 7200 MHz. Thus at the moment this model offers the highest performance among all GTX 770 models out there.

Pricing on all three models is unknown.