The Serial ATA (SATA) 6Gb/second storage interface will deliver the highest performance – burst speeds of up to 6Gigabits per second – for all PC applications, maintain backward compatibility with the SATA 3Gb/second and SATA 1.5Gb/second interfaces, and use the same cables and connectors as previous SATA generations to ease integration. The third generation of the mainstream storage interface for desktop and notebook computers also enhances power efficiency and improves Native Command Queuing, a SATA feature, to increase overall system performance and data transfer speeds of mainstream PC applications but especially applications with heavily transactional workloads such as scientific modeling and forecasting, and engineering design and simulation. 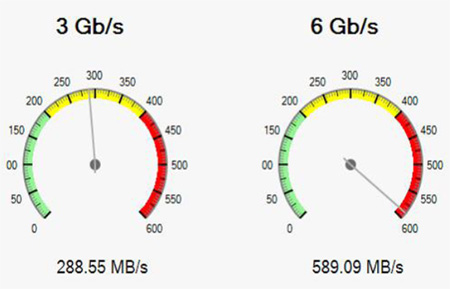 “The increasing reliance of consumers and businesses worldwide on digital information is giving rise to gaming, digital video and audio, streaming video, graphics and other applications that require even more bandwidth, driving demand for PC interfaces that can carry even more digital content,” said Joan Motsinger, Seagate vice president of Personal Systems Marketing and Strategy. “The SATA 6Gb/second storage interface will meet this demand for higher-bandwidth PCs. Seagate has a long history of being first to market with new technologies such as Serial ATA, perpendicular recording and self-encrypting drives, and is pleased to be teaming with AMD to stage the world’s first public demonstration of SATA 6Gb/second storage.”

In keeping with SATA-IO objectives for designing a low-cost interface for desktop and notebook PCs, SATA 6Gb/second maintains the low cost and low-power design requirements of previous SATA generations, and is designed to be backward compatible with SATA 3Gb/second connectors, cables and other hardware.