Storage Appliance Corp., developers of Clickfree, the easiest-to-use PC backup solutions on the market,  announced two new products, the Clickfree Traveler and Clickfree DVD Transformer.
Available May 7, 2009, both devices are PC and Mac compatible, and eliminate the confusing and time-consuming hassle associated with backing up irreplaceable digital data.

As light as a pen and the size of a credit card, the flash-based Traveler slips easily into a wallet, allowing business travelers, photographers, music lovers and others to carry up to 64GBs of data in their hip pocket or purse. The Clickfree DVD Transformer enables consumers to quickly and easily back up important data to optical discs, bypassing tricky CD and DVD burning software. Coupled with recordable CDs and/or DVDs, it’s an inexpensive yet foolproof way to back up important files. 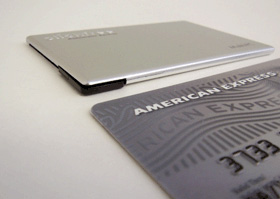 Despite its small size, like all Clickfree products, the Traveler includes an auto-launch feature so there is no need to install or configure software. Just insert the Traveler’s USB plug into a PC, and Clickfree does the rest, searching, copying and organizing more than 400 file types of digital data including documents (Word, Excel, PowerPoint), Outlook email and contacts, photos, video, music and even favorite websites. 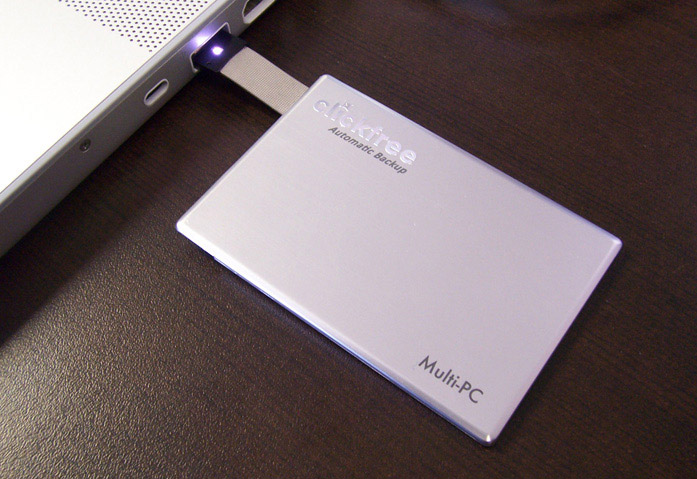 Road warriors and other professionals who typically operate with large amounts of data (photographers, graphic artists, financial planners), will find the Clickfree Traveler lets them carry hefty presentations or huge art portfolios in their wallet or purse. With the Traveler, business professionals will always have easy access to important content and can quickly restore critical information in the event of a lost, stolen or malfunctioning computer. Netbook users will find it a perfect complement to these smaller devices, allowing them to carry even more data without increasing their load. Other key benefits include:

* Backup multiple computers: Just plug it into any computer and the Traveler will automatically start, search, backup and organize content, keeping each PC’s data separated by user.
* Intuitive backup summary: The Clickfree patented application provides a clear and simple backup summary that lists the number of files backed up, the total size of the backup, details of files by type and more.
* Easily browse backed up files: Review any backed up file by using the backup application or Windows Explorer. For backed up photos, Clickfree also provides a thumbnail view that eliminates the need to open the entire file.

Clickfree DVD Transformer — an Inexpensive, Easy Solution for Students and General Household Use

The Clickfree DVD Transformer is also a small, flash-based device that connects to a PC’s USB port, automatically searching the entire computer for documents, photos, music files, videos and more. Once the search is complete and the content identified, consumers simply insert a blank disc into the computer’s burner and Clickfree does the rest. Tricky CD and DVD burning software is now a thing of the past.

At $39.99 (U.S.), it is an economical way to quickly backup and save files inexpensively. Coupled with the recordable CDs and/or DVDs most households have laying around, moms and dads can easily burn the latest family photos to send off to the grandparents, while its small size and low-cost makes it a must-have for any student with homework assignments and costly music libraries on their PCs.

The Transformer is an inexpensive yet foolproof way to back up important files.

Other key benefits include:

* Backup Multiple Computers: There is absolutely no limit – just connect the Clickfree DVD Transformer to any computer and the Clickfree software will automatically start and search for digital content. Users can repeat the process with as many computers as needed and the DVD Transformer keeps a complete record of every computer and every backup disc created.
* Incremental Backup Support: After the initial backup, users subsequently have the option of just backing up new or changed files rather than starting from scratch.
* Disc Spanning Support: Users can back up content to a single or multiple CDs or DVDs.
* Disc Management: The DVD Transformer will keep a record of every disc ever created on any computer. Just insert any disc while the Clickfree application is running and it will tell you what computer backup it is from, what backup set, and what disc of a multi disc set.
* Backup Summary: Simple and easy to understand, it lists the number of files backed up, the total size of the backup, details of files by type and more.

Backup is only as good as the Restore

Both the DVD Transformer and Clickfree Traveler come complete with Clickfree’s unique automatic “Smart Restore Technology” that is as easy to use as Clickfree backup. It allows the customer to effortlessly restore or share all files with any PC or Mac. Other manufacturer’s products that claim to restore applications and operating systems (“image backup”) fail to mention that these can only be restored to an identical computer and will also restore viruses, malware and corrupt applications and registry settings. All these problems can be avoided with Clickfree’s automatic Smart Restore Technology.