HP has announced two new Windows 8 ultrabooks and a hybrid PC, which will keep the company on the Windows 8 hardware market once the new Microsoft OS becomes available in about 2 months time.

The hybrid PC will be known as Envy x2 and combines a tablet and an ultrabook in a single device. It features an 11.6-inch touchscreen display, NFC support, SSD drive for storage, an 8 MP rear camera, HD front camera, Beats Audio and a keyboard dock. The Envy x2 will be available around the Christmas shopping season. 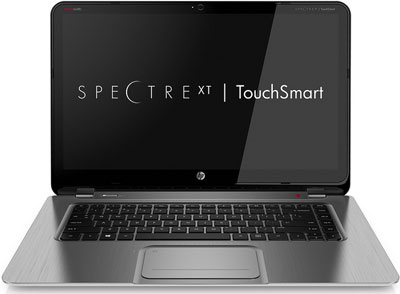 The new ultrabook models include the Envy TouchSmart Ultrabook 4 and Spectre XT TouchSmart. The Envy TouchSmart Ultrabook 4 is the smaller of the two and comes with a 14-inch display, AMD graphics, Beats Audio, a backlit keyboard and a 23 mm thin profile. The Spectre XT on the other hand is a 15.6-inch ultrabook that boasts an IPS display with Full HD resolution. The Spectre XT is also based on more powerful hardware – it comes with an Intel Core Ivy Bridge processor, mSATA SSD, USB 3.0, HDMI, Gigabit LAN plus some other extras.

The two ultrabooks will hit the market at different times though – the Envy TouchSmart Ultrabook 4 will ship during the Christmas holidays, while the SpectreXT TouchSmart will become available in December for a price of 1400 USD and up.