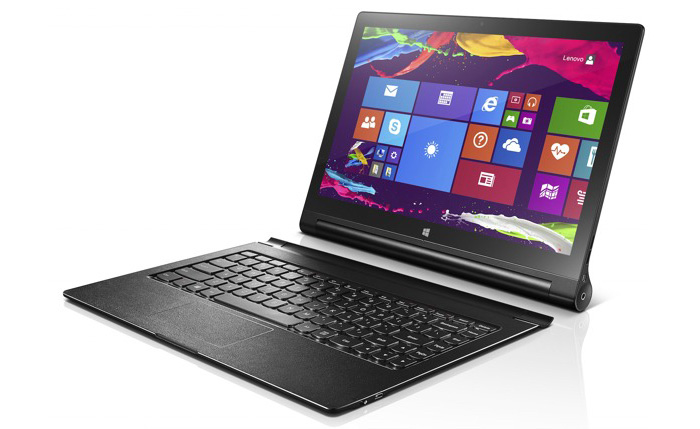 The Chinese Lenovo has added a new Windows-based tablet to its product list. The new device is called Yoga Tablet 2 and is very similar to the already announced Android-based Yoga Tablet 2 Pro. Just like the latter model, the former is a flagship device although it lacks in certain areas.

The new Yoga Tablet 2 features a larger display and follows the 8-inch and 10-inch versions announced earlier in October. Specs-wise the new model is almost a copy of the Yoga Tablet 2 Pro and therefore it comes with a 13.3-inch quad HD display, a quad-core Intel Atom processor at 1.86 GHz, 64 GB of internal memory, a convenient kickstand, a 15-hour battery and Windows 8.1. Just like other Lenovo tablets the new device comes with a Bluetooth keyboard cover, which makes it a powerful laptop/tablet hybrid. For music fans the tablet offers an onboard subwoofer and dual “large-chamber speakers”. Unfortunately the Windows-based 13-inch Yoga Tablet 2 lacks the Android version’s built-in projector as well as its rear camera. The front camera is the same 1.6 MP device.

The catch is that the new tablet’s specs will vary by region. So far the device will be launched in China and the US only and will start at USD 700. Expect the tablet in November of this year.