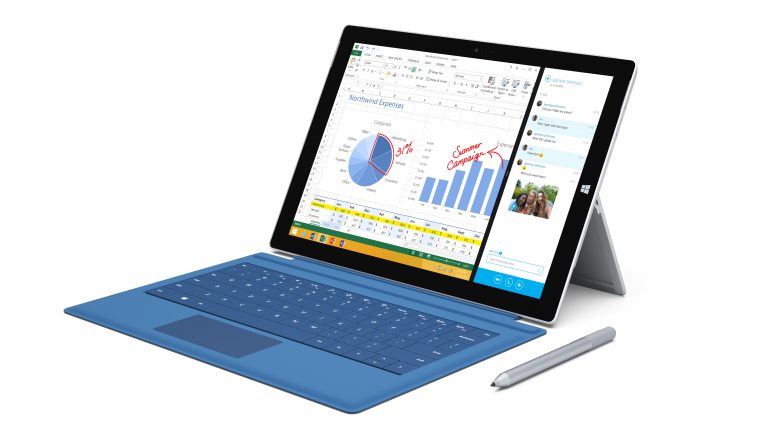 Microsoft has officially presented the latest Surface tablet computer that quite logically goes by the name of Surface 3. The new tablet computer comes with improved specs and measures 267 x 187 x 8.7 mm.

The Surface 3 weighs 622 grams and includes a quad-core Intel Atom Cherry Trail X7-Z8700 processor on 14 nm technology that runs at 1.6 GHz (2.4 GHz Turbo) and has built-in Intel HD Graphics. The chip has TDP of just 2 watts and makes almost no heat when operating. In addition the tablet has a 10.8-inch sensor display at 1920 x 1280 pixel resolution, 2 GB or 4 GB of DDR3 SDRAM (depending on model), 64 GB or 128 GB of internal memory (again depending on model), a microSD card slot for expansion, 802.11ac Wi-Fi, Bluetooth 4.0, a USB 3.0 port as well as mini DisplayPort and microUSB ports. The built-in battery provides up to 10 hours of operation in video playing mode.

The new Microsoft Surface 3 includes a tablet stand and has support for various other devices including the thin Microsoft Type Cover keyboard and Surface Pen stylus. The tablet runs Windows 8.1 64-bit but customers can also order the tablet with Windows 8.1 Pro. In both cases the OS can be later upgraded to Windows 10. The tablet is expected on May 5 this year. A bit later a 4G LTE version will also be made available. As to pricing the Wi-Fi-only version of the Surface 3 will sell for USD 499 and up.