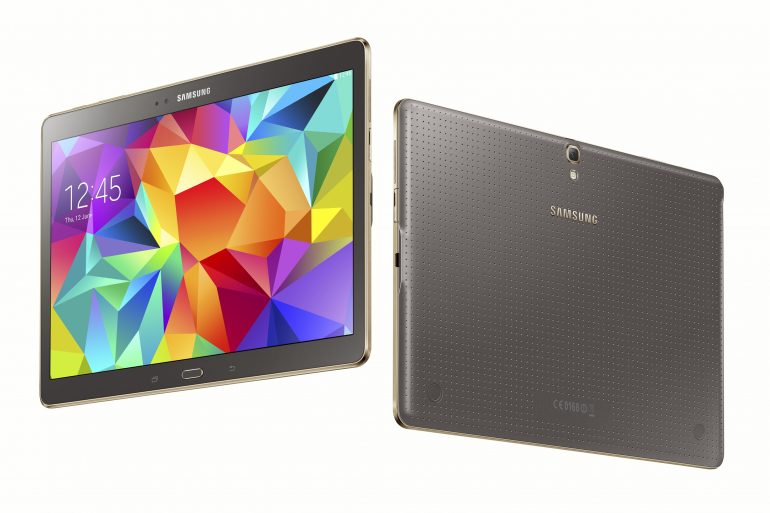 The Korean tech giant Samsung has officially unveiled its new Galaxy Tab S line of tablets. A specific feature of the new company products is that they all come with Super AMOLED displays at 8.4 or 10.5 inches that offer resolutions of 2560 x 1600 pixels in an aspect ratio of 16:10, a contrast ratio of 100 000:1 and more than 90 per cent coverage of Adobe RGB. In addition to that the tablets feature the so called Adaptive Display technology that automatically changes important display settings depending on the image displayed and the external light intensity.

The Galaxy Tab S is powered by an Exynos 5 Octa processor that comes with eight processing cores – four of them run at 1.9 GHz, while the remaining four operate at 1.3 GHz. The LTE-enabled version on the other hand offers a Snapdragon 800 chip that works at 2.3 GHz. The models come with 3 GB of RAM but differ in the storage capacity that is either 16 GB or 32 GB. A microSD card slot is also added; it works with memory cards with capacities of up to 128 GB.

There’s more to the hardware specs, though. The devices offer a built-in GPS receiver, 802.11ac Wi-Fi, Bluetooth 4.0, a fingerprint sensor and two cameras. The rear one offers a resolution of 8 MP while the front one offers 2.1 MP. Both of them can record in Full HD mode. Users also get Android 4.4 KitKat and a number of software applications such as Marvel Unlimited that gives users access to 15 thousand Marvel comic books; Kindle for Samsung offers one free book per month. There also are S-Note, S Translator, Samsung Link, Scrapbook apps and a video editor application.

The 8.4-inch Wi-Fi version of the tablet will sell for USD 399, while the 10.5-inch tablet will cost you USD 499 when both devices come to market next month. These prices are valid for the US market only.