The Cintiq 21UX experience starts with its amazing new pen performance, capable of capturing the slightest nuance of pen pressure against the LCD surface, as well as offering 2048 levels of pressure sensitivity. Other innovative enhancements include rear-mounted Touch Strips that are ideally placed for fingertip access while working. Each Touch Strip has an accompanying thumb-controlled Touch Strip Toggle button that controls up to four different user-assigned functions per application such as zoom, scroll, brush size adjustment and canvas rotation. In addition, the overall design has been refined and updated in an all-black color scheme, providing a sophisticated and handsome look. 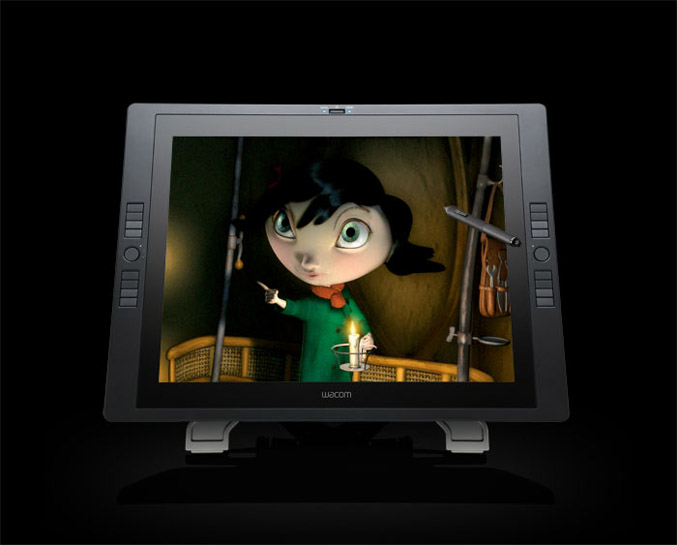 2048 Reasons to Work Directly On Screen

The Cintiq 21UX Grip Pen features Wacom’s new proprietary Tip Sensor technology, offering users near-zero (one gram) starting pressure for the most sensitive interactive pen display performance to date. “Now, pressure-sensitive support can start with an incredibly light touch, emulating the same organic feel, response and result derived from working with traditional brushes, markers and pens,” said Don Varga, Senior Product Manager for Wacom Technology Corp. Additionally, the Cintiq pen delivers 2048 levels of pressure, doubling the resolution of the pen’s pressure curve and greatly improving the accuracy of pressure-sensitive effects such as controlling line weights or opacity adjustments. The Grip Pen also features a pressure-sensitive eraser and two customizable side switches that can be customized for commands such as double-click and right-click. 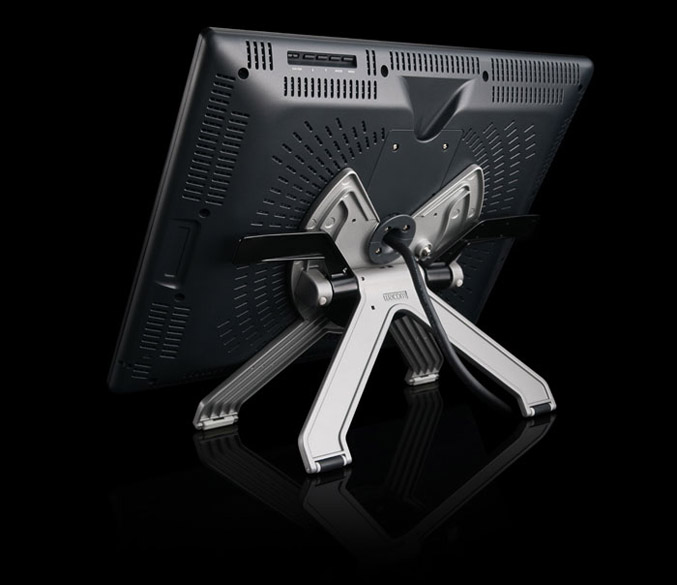 With a new ergonomic design and productivity features, the Cintiq 21UX is the ultimate tool for creative professionals. The customizable, application-specific ExpressKeys™, eight located on each side of the display’s bezel, are instrumental in helping improve workflow and boost productivity by placing commonly used commands at the fingertips. Pressing the top ExpressKey brings up an on-screen display showing the settings of all the ExpressKeys and Touch Strips. The close proximity of these tools to the actual work area is efficient and comfortable and helps save valuable time by minimizing dependence on the keyboard without taking focus away from the pen hand. 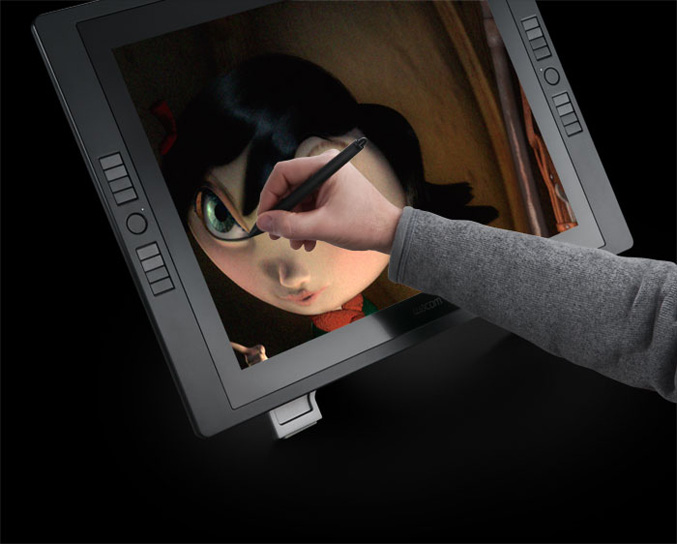 Also new to the Cintiq 21UX is the introduction of two user-defined, four-function Touch Strip Toggle buttons which control the function of their associated Touch Strip, located on the back of the bezel. The position of an illuminated LED located along the perimeter of the Toggle button indicates the current function of the Touch Strip. Fully application-specific, the Touch Strips can be used for up to four functions such as zoom, scroll, brush size adjustment and canvas rotation per application. This new ergonomic treatment is also extremely practical, allowing users to “toggle” with their thumbs while using their forefinger or middle finger to control Touch Strip speed and variation. “The four-function Toggle combined with the new location of the Touch Strips provides increased comfort and measurable increases in speed,” says Varga. “Additionally, locating the Touch Strips on the back of the pen display rather the front helps prevent accidental contact with the pen hand when, for example, flowing brush strokes are employed and extend beyond the screen’s border.” 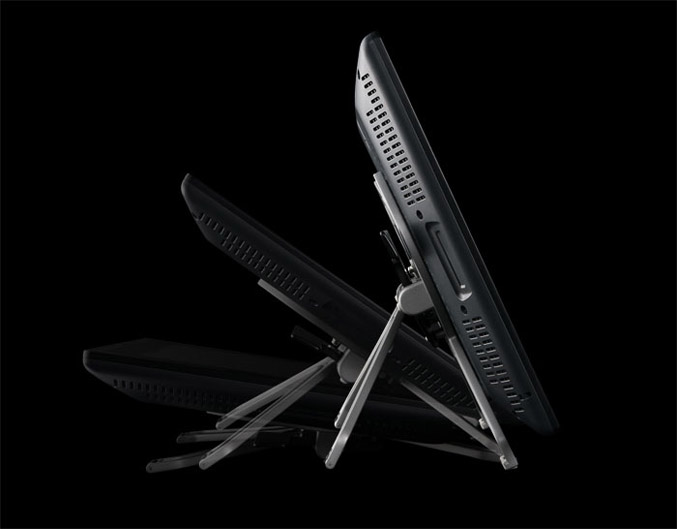 The Cintiq 21UX’s patented stand allows users to recline the pen display at any angle between 10 degrees and 65 degrees to match the users ideal working posture. In addition to reclining, the Cintiq 21UX can be rotated up to 180 degrees in either direction to take advantage of natural drawing movements or offer a different viewing angle. If desired, users can easily remove the Cintiq from the stand for use on a table top or to attach it to an articulating arm (not included) using the standard VESA (Video Electronics Standards Association) mounts located on the back of the display. 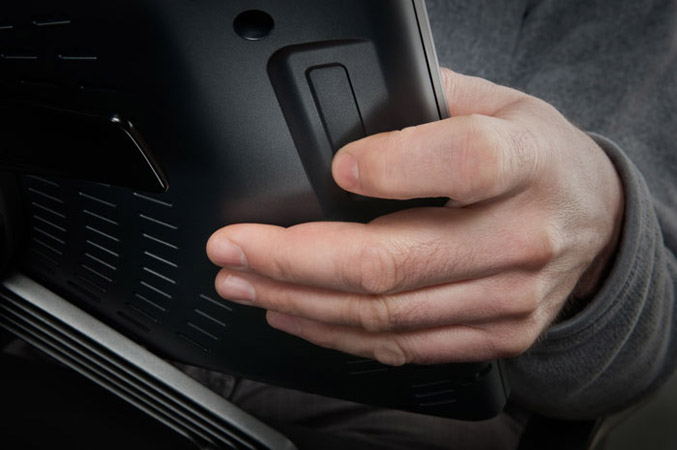 A new weighted pen stand is not only a convenient pen holder, but doubles as a handy twist-off storage compartment for pen nibs and handy nib removal tool. Standard, felt and stroke nibs are provided, allowing users to simulate the feel of working with a variety of traditional art and design materials.

To help users get started right out of the box, the Cintiq 21UX ships with valuable creative software from several of our software partners: 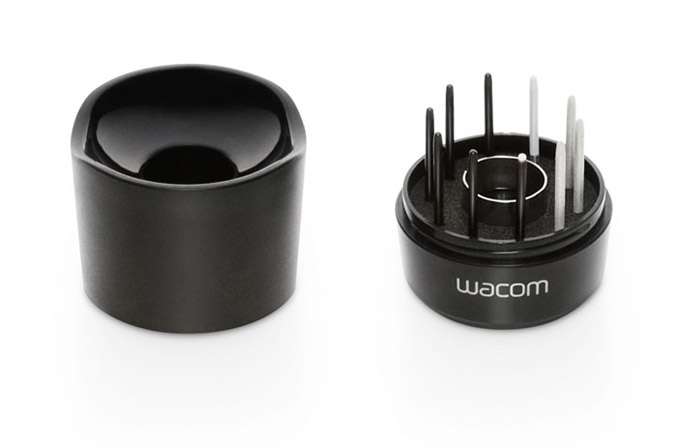 Wacom has a line of accessories to complement the Cintiq 21UX that address the specific needs of individual users. The Art Pen, for example, supports the barrel rotation feature within such applications as Adobe Photoshop, Illustrator® and Corel Painter 11, allowing users to create natural brush effects by rotating the pen, much like a calligraphy pen. The Art Pen is newly designed and features a round barrel with two nib options, standard and chisel-tip. The Airbrush pen offers users a digital airbrush that has a similar form and wheel-based control as a traditional airbrush. It provides creative, fun effects when combined with select applications. Cintiq 21UX accessories can be conveniently purchased at the direct.wacom.com Internet site. 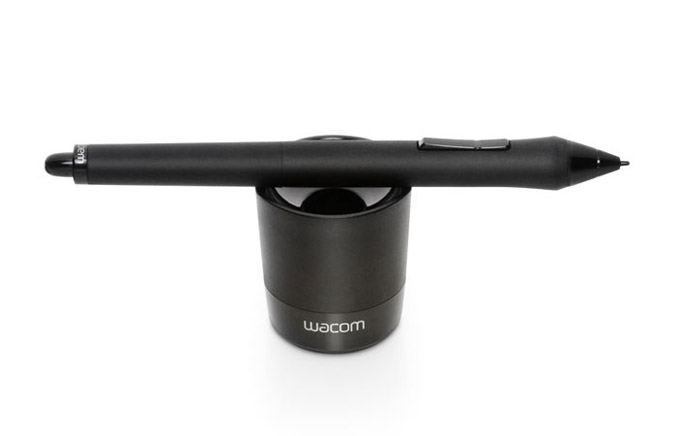 The new Cintiq 21UX (DTK-2100) priced at $1999 USD is intended to begin shipping in the United States, Canada and the majority of Latin America countries in late March or early April. It will be available in Argentina, Brazil and Chile in early summer due to certification requirements in those countries. Consult your local electronics retailer or visit www.wacom.com for the most current information.