Garmin Ltd. and ASUSTeK Computer Inc.  announced a strategic alliance that will leverage the companies´ navigation and mobile telephony expertise to design, manufacture and distribute co-branded location-centric mobile phones. Garmin and ASUS have already begun joint development on a diverse mobile phone product line, which will be known as the Garmin-Asus nüvifone™ series. The companies expect to bring to market several Garmin-Asus nüvifone models in 2009, and a new Garmin-Asus nüvifone model will be announced at the Mobile World Congress trade show in Barcelona, Spain, February 16-19, 2009.

“We believe that converged devices are an emerging opportunity,” said Dr. Min Kao, chairman and CEO of Garmin Ltd. “This alliance is advantageous to both companies because it allows us to combine our resources and establish a strong foundation from which we will innovate and introduce the world to the benefits of LBS-centric mobile phones. We´ve been working with ASUS for over one year on the initial nüvifone that was announced in 2008 on the basis of an ODM relationship. Learning from this experience, we concluded that by leveraging and combining our respective industry-leading areas of expertise at a higher level, we will be able not only to significantly expand our product line, but also to shorten our product development time. We believe that through this strategic alliance we are uniquely positioned to deliver the world´s best integrated and most compelling GPS-enabled mobile devices.”

“This alliance allows ASUS and Garmin to seamlessly combine the strength of both companies to offer the market leading mobile phone solutions that are of the highest design and quality. ASUS and Garmin both believe strongly in the continuous investment of R&D resources to always provide the leading-edge innovations to people and businesses,” said Jonney Shih, Chairman of ASUSTeK Computer Inc. “Through this alliance, our companies will continue to develop innovations that simplify life. Our technologies should accommodate our customers, not the other way around. We believe all devices should perform and communicate seamlessly not just anytime and anyplace, but in real time, in real places, and we´re confident the nüvifone series will meet this objective.”

LBS functionality is core to the Garmin-Asus nüvifone series, which will offer the same
turn-by-turn, voice-prompted navigation features found on high-end Garmin portable navigation devices (PND). It has preloaded maps and millions of points of interest that allow drivers to quickly find a specific street address, establishment´s name or search for a destination by category. In addition, the nüvifone includes quick access to online points of interest through internet enabled local search. The nüvifone harnesses the power of the worldwide web and information about local merchants and attractions is continually updated. The nüvifone also features Ciao™, a social networking application that bridges the gap between multiple location based social networks and integrates them seamlessly into one device. 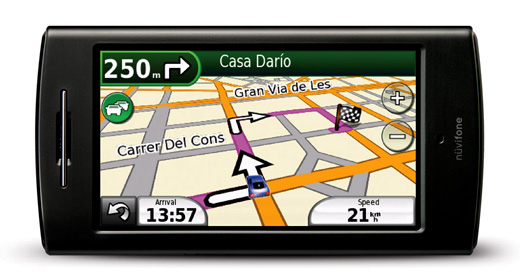 Garmin-Asus nüvifone models will be on display at the Garmin-Asus booth at the Mobile World Congress trade show in Barcelona, Spain, February 16-19, 2009 (7C37, hall 7). Journalists should contact the Garmin or Asus media contacts to arrange a live demonstration or interviews. Additional information is available at www.GarminAsus.com.