“When ARENA was firstly unveiled at the Mobile World Congress 2009, we saw great excitement from our customers in its stand-alone multimedia features,” said Dr. Skott Ahn, President and CEO of LG Electronics Mobile Communications Company. “Visitors particularly appreciated features such as the world’s first Dolby Mobile, WVGA display, 5 megapixel camera, 40GB storage capacity and most of all the intuitive 3D S-Class user interface, which makes accessing these other features a much more enjoyable experience.” 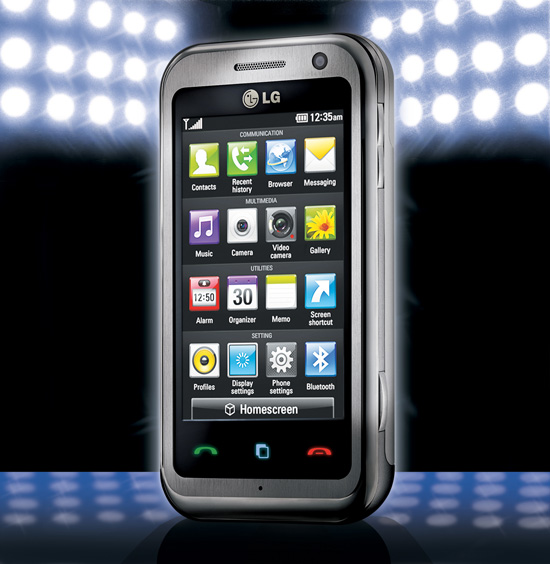 Since its debut at the Mobile World Congress 2009 in Spain this February, not only has ARENA created huge media interest and buzz from bloggers, but it has also achieved one million unit pre-orders from various carriers around the globe.

D1 recording capability captures DVD-resolution video that looks great even when played back on a large TV. A range of equalizer presets to fit all genres and individual tastes make the experience even better. Hundreds of music and movie files can be handled with expanded 40GB storage, including 8GB of internal memory and a micro SD slot. Its powerful battery offers up to 30 hours of MP3 playtime and 300 hours of standby time.

Users don’t have to sacrifice high quality picture for their unforgettable moments due to ARENA’s five megapixel camera with auto and manual focus capabilities. Video and photos can easily be shared on social networking sites, thanks to 3G HSDPA 7.2 networks and Wi-Fi. FM transmitter and 3.5 mm audio jack always leave space for users who want to enjoy their music in the car, at home on a stereo or anywhere with preferred ear phones. Other advanced features include Google Mobile Service*, A-GPS and geo-tagging.

Debuting on ARENA, LG’s new S-Class UI offers the most exhilarating gateway to enjoy these countless multimedia features. It was designed from the very start to leverage the advantages of touchscreens and eliminate unnecessary menus and steps. At its core is a 3D cube layout that provides four customizable home screens. Users can have much faster and easier access to all features by flipping the cube with just the flick of a finger. The Elastic Lists feature is one of a kind with list items being stretched like a rubber band when touched, eliminating the extra step of switching to a new screen for other choices.

Fast yet smooth 3D transitions between menus are made possible with the help of a powerful AMD processor. The quick touch response and multi-touch capabilities greatly enhance the web surfing experience for users.

Intuitive and life-like touch-based 3D menus take the fuss out of searching through contacts and multimedia content, perfect for anyone more comfortable with a traditional analogue experience. For example 3D Reel Scrolling lays out menus as if they were on a film reel, so users can naturally view multimedia options by just dragging the reels with their fingers.

With S-Class UI, LG provides not only better functionality but also a lot of fun. ARENA’s colourful graphics give ARENA a great sense of dynamism. For example, images in the Floating Image Gallery cascade off the screen randomly when the phone is turned horizontally, not only providing great convenience in viewing photos, but searching as well. Users can see photos taken on the same day by sliding a finger from top to bottom and those taken on different days by dragging a finger from left-to-right.

LG ARENA comes in silver and black titanium colour schemes and will be available for purchase starting in March in major European markets. Please visit http://arena.lgmobile.com for more information on LG ARENA.