Nokia has today announced plans to release a new version of Ovi Maps for its smartphones that includes high-end walk and drive navigation at no extra cost,available for download at www.nokia.com/maps. This move has thepotential to nearly double the size of the current mobile navigation market.The new version of Ovi Maps includes high-end car and pedestrian navigationfeatures, such as turn-by-turn voice guidance for 74 countries, in 46languages, and traffic information for more than 10 countries, as well asdetailed maps for more than 180 countries.

“Why have multipledevices that work that work in only one country or region? Put it all together,make it free, make it global and you almost double the potential size of themobile navigation market ,” explained Anssi Vanjoki, Executive Vice President,Nokia. “Nokia is the only company with a mobile navigation service for bothdrivers and pedestrians that works across the world. Unlike the legacy carnavigation manufacturers, we don’t make you buy maps for different countries orregions even if you’re only visiting for a few days. We offer both navigationand maps free of charge, with all the high-end functionality and features thatpeople now expect.”

For Nokia, removing thecosts associated with navigation for drivers and pedestrians allows the companyto quickly activate a massive user base to which it can offer new locationfeatures, content and services. This is part of Nokia’s strategy to lead themarket in mobile maps, navigation and location-based services. The move is alsoin line with Nokia’s vision that the next wave of growth will be centered onthe location-aware, social internet — as the ‘where’ people are doing thingsbecomes as important as the ‘what’ they are doing.

According to researchfirm Canalys, the number of people worldwide using GPS navigation on theirmobile phones was approximately 27 million at the end of 2009. With thisannouncement Nokia potentially grows the size of this installed user base toabout 50 million by enabling smartphone owners, with compatible devices and devicesthat will be made compatible shortly to activate free drive and walk navigationthrough a simple download of the new Ovi Maps. Nokia will further grow thisbase as it quickly adds more smartphones to the compatible devices list.Canalys also estimated in 2009 that the installed base of smartphones withintegrated GPS was 163 million units worldwide, of which Nokia accounted formore than half (51%) having shipped cumulatively 83 million GPSdevices.

“This is a gamechanging move. By leveraging our NAVTEQ acquisition, and our context sensitiveservice offering, we can now put a complete navigation system in the palm ofyour hand, wherever in the world you are, whenever you need it – and at noextra cost,” continued Anssi Vanjoki. “By adding cameras at no extra cost toour phones we quickly became the biggest camera manufacturer in the world. Theaim of the new Ovi Maps is to enable us to do the same for navigation.” 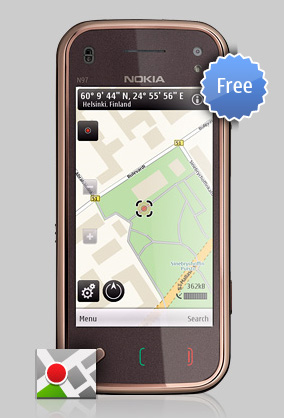 By removing the addedcosts for consumers Nokia expects to fuel the take-up of mobile maps andnavigation providing its ecosystem of partners with clear businessopportunities:

Nokia believes it willenable them to offer their customers a complete car and personal navigationpackage as well as encourage the take-up of data plans. An additional benefitfor operators is that Ovi Maps uses a unique hybrid technology that isoptimized for use on a mobile network. By using advanced vector graphics, plusan intelligent combination of pre-loaded and online maps, the new version ofOvi Maps uses a fraction of the bandwidth of the bulky bitmap technology usedby most mobile map providers.

Making navigation on amobile as familiar as sending a text or taking a picture presents a hugeopportunity as the customer base for additional location-based applicationsexpands. Via the Ovi for Developers Beta Program, Nokia has given selecteddevelopers and publishers a preview of the Ovi APIs and SDK – Beta (softwaredevelopment kit) which will allow them to build such applications. These willthen be made available through Ovi Store by Nokia.

Ovi Maps is immediatelyavailable for download for 10 Nokia handsets, including the popular Nokia N97mini, Nokia 5800 XpressMusic and Nokia E72, with more Nokia smartphonesexpected to be added in the coming weeks. In the meantime, current owners ofNokia smartphones that are compatible with the new Ovi Maps can download itfree of charge from www.nokia.com/maps.

From March 2010, newNokia GPS-enabled smartphones will include the new version of Ovi Maps,pre-loaded with local country map data, with high-end walk and drive navigationand access to Lonely Planet and Michelin travel guides at no extra cost.

Ovi Maps covers morethan 180 countries with car and pedestrian navigation for 74 countries in 46languages and 6000 3D landmarks for 200 cities around the world. Lonely Planetand Michelin guides have information on more than 1,000 destinations globally.