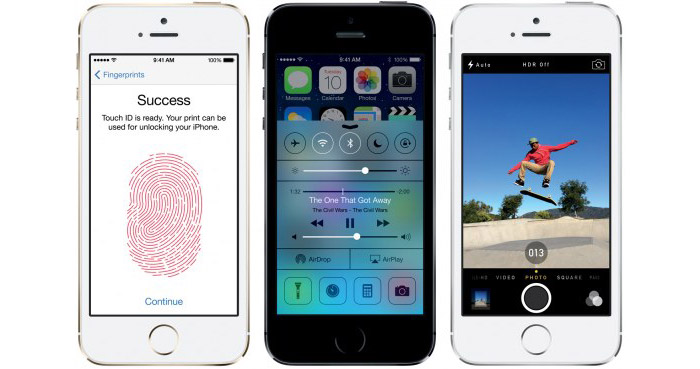 As previously expected US tech giant Apple has officially unveiled the rumored iPhone 5s – a device that is to succeed last year’s iPhone 5.

The iPhone 5s is full of innovation – it is the first Apple iPhone that comes with a 64-bit Apple A7 processor, which is 40 times faster than the chip found in the first iPhone. In addition the iPhone 5s has an Apple M7 processor that works exclusively with the sensors, an improved rear camera and a fingerprint reader.

Measuring 123.8 x 58.6 x 7.6 mm the iPhone 5s weighs 112 grams and boasts a 4-inch display at 1136 x 640 pixels, a built-in GPS receiver, 802.11n Wi-Fi, Bluetooth 4.0, and a battery capable of powering the device for up to 250 hours in standby mode and 10 hours in talk mode. On the back the new Apple product has an all-new 8 MP iSight camera with a larger f/2.2 aperture and a new larger sensor with 1.5m pixels for better sensitivity and low light performance. To improve things even further the iPhone 5s has the new True Tone flash – the world’s first – that dynamically adjusts color and intensity for more than 1000 combinations so photos taken with the flash appear to be more natural. The front camera has fewer capabilities – it offers a 1.2 MP sensor and video recording at 720p.

A new addition to the iPhone line is the integrated fingerprint reader – this is the new way to unlock your iPhone. Called Touch ID, it uses a laser cut sapphire crystal along with a capacitive touch sensor to take high-resolution images of a fingerprint and intelligently analyze it to provide accurate readings from any angle. It recognizes the touch and the sensor is activated only when needed preserving battery life. All fingerprint information is stored on the iPhone 5s and not on online servers. Furthermore you can use Touch ID as a secure way to authorize purchases online.

The Apple iPhone 5s runs iOS 7 and comes in gold, silver or space gray. In the US the 16 GB version of the smartphone will sell for USD 199, while the 32 GB and 64 GB models will be available for USD 299 and USD 399. Customers in the USA, Australia, Canada, China, France, Hong Kong, Germany, Japan, Puerto Rico, Singapore and the UK will be able to purchase it on September 20; by the end of the year the new Apple device will be on more than 100 markets.