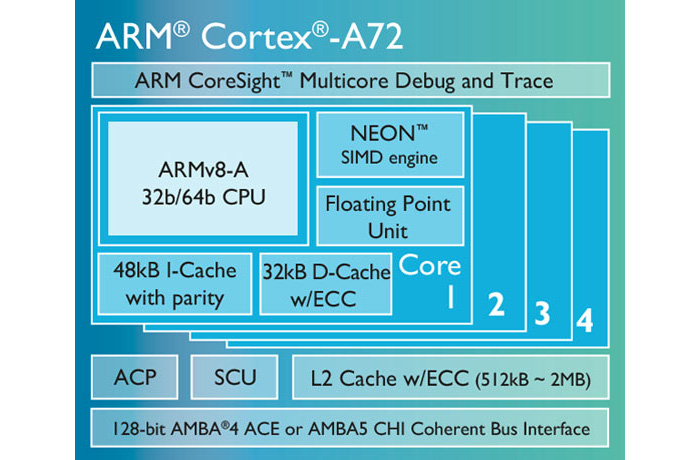 The company ARM, which is known for designing mobile processors, has presented the new Cortex-A72 processor core. The new core will be used in high-end smartphones only and provides unmatched performance as of now.

According to ARM a single Cortex-A72 core is 50 times more powerful than the fastest smartphone processor of 5 years ago. Built on 16 nm FinFET technology the chip can run at clock speeds reaching 2.5 GHz. The chip offers 48 KB of L1 instruction cache, 32 KB of L1 data cache and 512 KB – 2 MB of L2 data cache as well as an integrated floating point unit.

ARM has also presented the new Mali-T880 GPU, which happens to be the fastest and most energy efficient ARM GPU to date. The chip succeeds the ARM Mali-T820, Mali-T830 and Mali-T860 GPUs and offers a Mali-DP550 display controller and a Mali-V550 video processor.

The last new ARM product is the new CoreLink CCI-500 Cache Coherent Interconnect. There is little information on this one but the three new ARM products will allow 4K playback and up to 120 FPS in various applications.

The ARM Cortex-A72 chip has already been licensed by MediaTek, HiSilicon and Rockchip. The first devices with the new processor are expected in 2016.