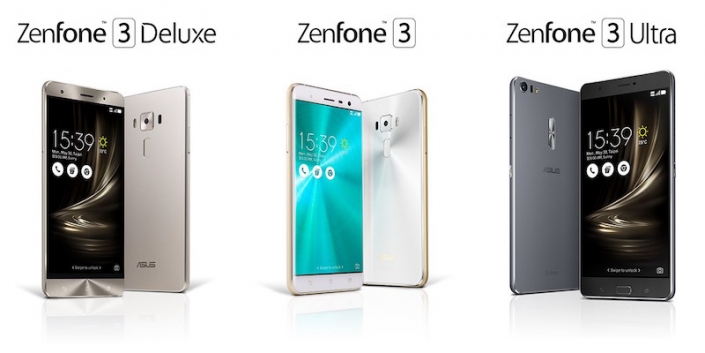 As expected earlier ASUS has unveiled three new ZenFone smartphones just days before Computex 2016. The new devices are called ZenFone 3 Deluxe, ZenFone 3 and ZenFone 3 Ultra and unfortunately there are no last minute positive changes in the tech specs of the devices, which were leaked a while ago.

So the final specs of the ZenFone 3 Deluxe include a 5.7-inch AMOLED display at Full HD resolution, a Snapdragon 820 SoC, 6 GB of RAM (!), a 23 MP rear camera and an 8 MP front shooter. The device also boasts 256 GB of internal memory, a 3000 mAh battery and Qualcomm’s Quick Charge 3.0 technology.

The ZenFone 3 Ultra is closer to being a phablet than a smartphone – this device features a large 6.8-inch display that works at Full HD resolution, a Snapdragon 652 processor, 4 GB of RAM and 128 GB of internal memory. In the back the smartphone boasts a 23 MP camera with a Sony IMX318 sensor. Up front the communicator has a fingerprint reader, which is located under the Home button and an 8 MP front camera. In addition to this the ZenFone 3 Ultra has a 4600 mAh battery and a USB Type-C port.

The ZenFone 3 is the simplest device of the three – it has a 5.5-inch display that functions at Full HD resolution, a Snapdragon 625 processor, 3 GB or 4 GB of RAM and 16 GB or 32 GB of internal memory (depending on the chosen version), a 16 MP rear camera with ASUS PixelMaster 3.0 technology and a Sony IMX298 sensor, an 8 MP front shooter, a fingerprint reader and a 3000 mAh battery.

All three new smartphones run Android 6.0 Marshmallow under the ASUS ZenUI 3.0 interface. Unfortunately there’s no information when the three handsets will be in stores and how much they will cost.