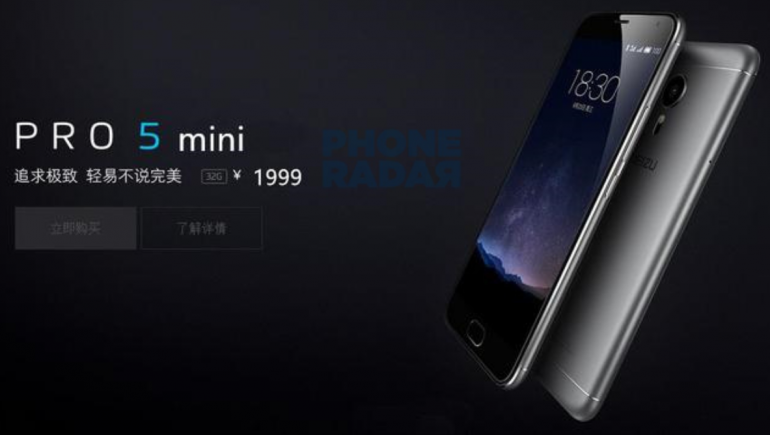 A few months ago the Chinese smartphone maker Meizu launched its Pro 5 smartphone, which was destined to serve as the company’s flagship handset for the year 2015. Still, most other smartphone makers have downsized versions of their flagships for people who do not want to spend too much money on one such device but Meizu currently does not. This is the situation that the company will soon fix with a new smartphone called Pro 5 Mini.

The new device will try to mimic being a smaller version of the Pro 5 flagship and now we will tell you why – the Pro 5 Mini will come with completely different specs compared to what the Pro 5 offers. For instance the Pro 5 Mini will have a 4.7-inch capacitive touchscreen at unknown resolution, while the Pro 5 has a larger 5.7-inch display at Full HD resolution. In addition the Pro 5 is powered by Samsung’s Exynos 7420 chipset, while the Pro 5 Mini will be powered by MediaTek’s MT6797 Helio X20 processor with 10 cores under the hood, which will provide a boost in performance for sure. On the outside the smaller smartphone will also have a metal chassis, which is in unison with Meizu’s Pro 5 and a nice feature that should not be underestimated. Finally the Meizu Pro 5 Mini will be available in two versions – with 32 GB of internal memory and with 64 GB of memory inside. The first model is expected to sell for USD 315, while the second one with more memory will retail for USD 395.

The Meizu Pro 5 Mini should be on the market in a few weeks time.